The following article by Stacy Clardie is the eighth in a series that shares our Pastors’ testimonies of how the Lord led them to serve at Faith Church.

He was sitting in a seat next to the window, at the end of a row, in Room 1 at Faith’s Community Center on the east side of Lafayette, listening to Brad Franklin teach a college ABF in the fall of 2009.

Lees was a college sponsor, serving at Faith but using his Purdue degree to work in IT full-time.

It was in that room, though, Lees had a revelation.

Lees went home to tell his wife he’d love to go to seminary school and become a pastor. After seeking counsel and praying, Lees applied to Faith Seminary. Years later — and only days after graduating — Lees was made Faith’s Pastor of College Ministries and the director of Faith West ministry housing.

The reward came after quite a journey.

In high school, Lees first felt the tug to go into ministry after getting involved in a youth group. He applied to Indiana Wesleyan with the intent of double majoring in psychology and youth ministry, as well as Purdue for IT. He chose Purdue but never really felt settled with that decision.

Especially when, by the time he was a junior, he’d gotten hooked up with Faith Church and connected in its campus ministries. For the first time, he began to hear answers from the Bible through preaching, and “that was eye-opening,” Lees said.

By his senior year, Aucoin was asking if Lees had considered full-time ministry, which he had, but Lees wanted to do at least try to put his Purdue degree to use.

And then the self-proclaimed “big nerd” got what seemed to be the ideal job, landing a gig in Raleigh, N.C., with Cisco Systems.

But about eight months in, it was clear that what Lees thought was a dream job wasn’t.

He found himself looking forward to the nights and weekends when he was with his family and serving at a local church.

“I was thinking, ‘Do I want to spend the rest of my life working 40, 50 hours a week only to look forward to the time on nights and weekends?’ That just seemed silly to me,” Lees said. “I just thought there had to be a better way. So I began to seek out wise counsel … Eventually, it just came to the point where my wife and I realized we needed to make a decision. Are we going to stay out there and continue to pursue an IT career or will we come back here and at least be apart of Faith where we knew we’d be stretched and pressed to grow and then figure out the rest from there?

“We decided we were going to come to Faith again.”

Even with nothing waiting for them back in Indiana.

Lees was applying everywhere but getting no offers, and his wife, who recently obtained her master’s degree, also wasn’t getting any takers.

“It was like literally kind of a leap of faith for us to come back here,” Lees said. “We’d committed it to the Lord, had no jobs lined up. We were leaving our only income to come back here. Our family thought we were crazy. But we thought that’s what we needed to do to please God and to grow and to be stretched.”

He had a bigger calling.

“I wanted to keep working in campus ministry, in college ministry just because it’s such a transitional period of life for so many people as they try to figure out what they believe,” he said. “They grew up maybe in a home where Christianity was taught, but now they have to choose to make it their own. Or for some, they’ve never considered Christianity at all, so it’s just a very important time for a lot of students.”

It’s been a busy time for Lees, too, who only has been in the position since July 2013.

On Mondays, he does Biblical counseling.

On Tuesdays, he sets aside time for college ministry, preparing lessons for Friday night’s PBF.

On Wednesdays, the schedule is full of meetings much of the day and then he works on housing for Faith West afterward, trying to keep the place full even in the summer months.

On Thursdays and Fridays, he’ll meet with college men, do some counseling and discipleship. Friday night is PBF, typically from 6:30-9 p.m.

Lees quickly has learned students operate on their own time schedule, and it’s not uncommon for him to get calls or texts late at night or early in the morning. But it’s worth it, all part of developing relationships and building disciples.

“It’s been very rewarding, and it’s really neat because they’re out of the home, they’re independent, they’re able to speak for themselves a little bit more and make decisions. I have a guy right now who’s graduated, this last weekend from Purdue, and I’ve been meeting with him for the last two years. It’s been really neat to see the growth in his life. By the time you’re done, especially by the time they’ve graduated from college, they’re not a peer, they’re like a friend. The relationship is able to span multiple levels. As I get older, that probably will change, but it was neat to see the relationship I’ve been able to develop with that guy over the last couple of years.”

Lees and his wife, Micaela, have two children, Anniston and Eden. 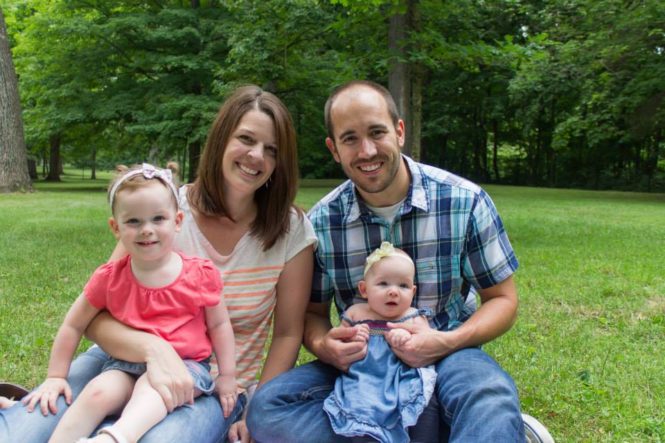