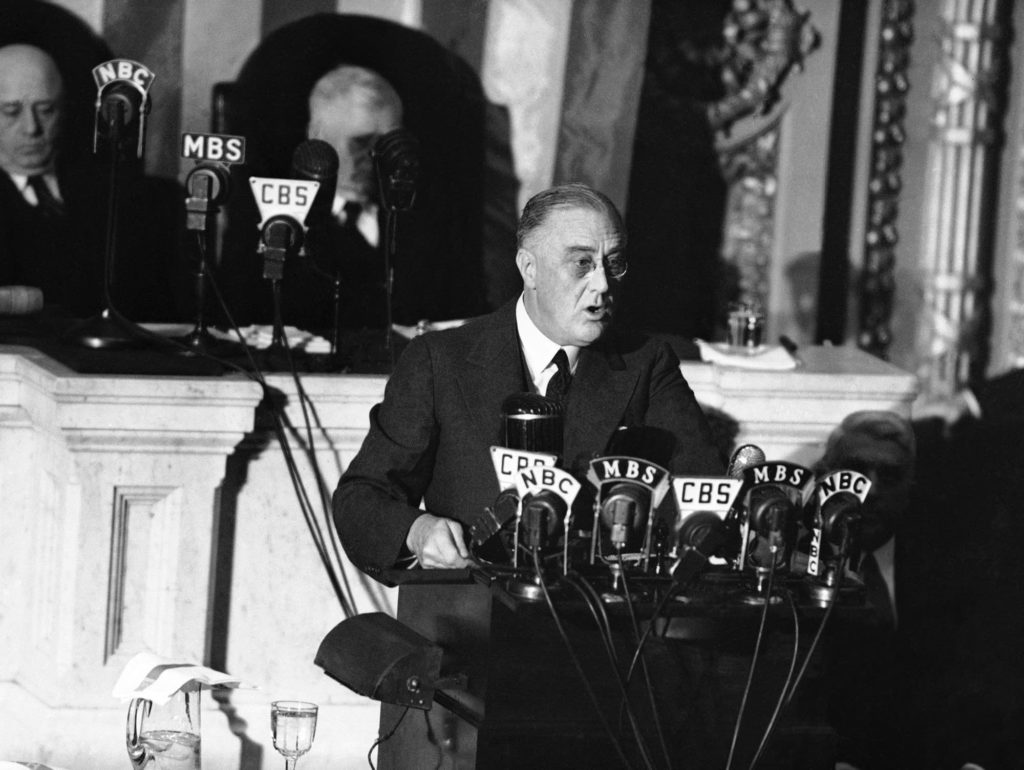 On March 4, 1933, Franklin Delano Roosevelt rose from his seat to give his inaugural address as the 32nd President of the United States. At the time of his inauguration, nearly one quarter of the American workforce was unemployed from the impact of the Great Depression.

Roosevelt’s election was a pivotal moment in US history. The economy was not recovering, even after three and a half years of futile attempts by government, finance, and businesses.

FDR was an unusual choice for president. He came from a life of patrician wealth, replete with mansions and servants, as well as cousin Theodore, the 26th President. Roosevelt was also the polar opposite of the most recent President, Herbert Hoover.

In 1921, FDR contracted polio, rendering his legs useless for the remainder of his life. His life changed radically from his formerly active livestyle as he slowly recovered his health. Contrary to the cheerful appearance he came to personify, the last 24 years of his life were filled with debilitating pain and suffering. In the 2014 Ken Burns’ series The Roosevelts, columnist George Will made the following observation:

“… when the steel went onto Roosevelt’s legs it also went into his soul. That may have been true in FDR’s case, but it’s true too that suffering is not ennobling for everyone. Some people are broken by it; some are embittered by it. As polio nears the end of its long and terrible run, the things FDR achieved despite—even partly because of—his affliction remain nothing short of remarkable.” Jeffrey Kluger, Time Magazine, September 12, 2014 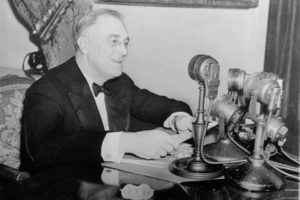 When FDR spoke on that bleak March day he offered comforting words to soothe the raw nerves of a frightened land: “So, first of all, let me assert my firm belief that the only thing we have to fear is fear itself – nameless, unreasoning, unjustified terror which paralyzes needed efforts to convert retreat into advance.”

This was spoken by a man who had walked to his bed one night and awoke with the complete loss of his legs. A man who had faced deep personal despair reading that, politically, he was ‘washed up’ due to his paralysis. What would cause his transformation to a person of determination, confidence, and committed leadership? Why did FDR so firmly believe the only thing to fear is fear itself?

While Roosevelt lived in a very different time and place, he had an abiding and deep personal faith in God. FDR’s speeches, throughout his presidency, are littered with scripture and references to the teachings of Jesus Christ. In his famous 1941 “Four Freedom’s” speech, he clearly outlined why one of America’s most cherished values was the Freedom of Worship.

Our personal and corporate relationship with a Holy God was a theme FDR often returned to. Near the conclusion of his 1942 State of the Union address, Roosevelt framed World War II as a spiritual contest between those who did and didn’t affirm our creation. Historian Chris Gertz, in a 2018 article, highlighted this excerpt from FDR’s address; “Our enemies are guided by brutal cynicism, by unholy contempt for the human race. We are inspired by a faith that goes back through all the years to the first chapter of the Book of Genesis: God created man in his own image.”

Today, we are facing a time where many people are living in fear for their health and lives. As believers in Jesus Christ, we must look to the bold certainty and sufficiency of God’s Word. In 2 Timothy 1:7 KJV, Paul writes: “For God hath not given us the spirit of fear; but of power, and of love, and of a sound mind.”

When the Apostle Paul wrote these words, he was again in a Roman prison, this time in Emperor Nero’s chains. There would be no reprieve, only a death sentence.

Yet, regardless of whatever state he was in, Paul spoke of hope, of encouragement, and of facing fear.

Therefore encourage one another and build up one another, just as you also are doing. 1 Thessalonians 5:11

I can do all things through him who strengthens me. Philippians 4:12

How are we facing fear today? Pastor Tim Keller encourages us to rely on God like David, when he describes God as a “shield around me” (Ps 3:1). The full-body shield which curved around the body was meant not for hand-to-hand combat but for following your commander into situations of extreme danger.

We fight our fear by going forth in obedience, regardless of the perceived cost.

Roosevelt stood in excruciating pain while exhorting us to face fear and advance as a country. Paul wrote in prison chains of having kept the faith no matter the consequence. Let us see this time of viral quarantine not as one of fear, but as an opportunity to love one another and to be a living testimony to the one who ultimately gave His life for us.