After the conference, Dr. Bob Smith, Bill and Naty Tully, and David Selvey made the 3 hour trip to southern Moldova to spend the weekend in the homes of a local pastor and youth minister.
Mark and Keri and the Tullies stayed in the home of Andrei and Lydia Ciobanu, Naty Tully’s parents. Brother Andrei is the pastor of the local church in Vadul lui Sac. Bob Smith and David Selvey stayed in the home of Misha and Angelica Caraivan. Brother Misha is the youth minister in the church in Vadul lui Sac.

Saturday we visited Pastor Anatol at his church in the university town of Cahul. Brother Anatol is leading a congregation primarily comprised of university students. They are currently renting three different locations to house their ministries. One is their meeting place for holding services, another is a location where they teach computer literacy using it as a opportunity for evangelism, and a third is used for teaching martial arts and other sports as an outreach ministry. They have a building currently under construction. 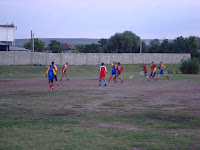 We also had occasion to watch a regional championship soccer game that was held in the local village “stadium.”
Mark and Keri took some time to play volleyball with some of the local church people.
Faith Global Ministries is a ministry of Faith Baptist Church of Lafayette, IN.