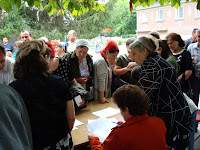 Monday, August 27, 2007
We drove about ½ hour to the campground for the Biblical Counselor Training Conference on the Niestre River. The river separates Russian occupied Transdniestria from the rest of Moldova.
It was a joyous time to see faces of folks who were in the conference last year and to see new people coming to learn about Biblical Counseling. Nearly 90% of those who attended the conference last year for track one returned this year for track two! We had as close to an equal number of folks in track one this year.
The camp holds 250 and we had a total of 270 come to the conference! We had to ask that those who lived in the nearby capital of Chisinau commute back and forth each day and sleep in their homes.
Praise God for the funds to be in a camp that has more capacity, is cleaner, better equipped and closer to the capital city of Chisinau.
Because some understand only Russian and others only Romanian we had two classes for each of the two tracks, one interpreted in Russian and the other interpreted in Romanian. Our interpreters worked hard as we taught four 90 minute sessions daily followed by a one hour question and answer period after supper each evening. I believe the Sunday, August 26, 2007
We all ministered the Word of God in local churches Sunday morning. Steve preached in Brother Ghiletchi’s church, one of the largest evangelical churches in Moldova. Mark preached for Brother Mihai Melancea in his church. Dan and Bob preached for brother Sergei Namesnic and David preached in a small church plant that Virgil and Ana are leading.
We spent the rest of the day preparing for the pastors’ conference scheduled to begin Monday.
interpreters had to work harder than we did!
We were glad that Brother Valeriu Ghiletchi taught the first two sessions in Romanian.
Faith Global Ministries is a ministry of Faith Baptist Church of Lafayette, IN.