After having been a grateful eyewitness to Purdue women’s basketball team bringing home a victory against Wisconsin, we all started to eagerly follow their success in the morning paper at breakfast time. Being so blessed to be able to go to a live game (which was a first for some of us) was enough to get us all up on our feet doing cheers to root for Purdue to win! 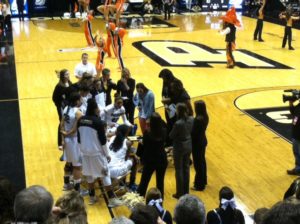 At the game, we wore as many Purdue colors and items of clothing as Jen Faulkner and the blessing closet had to offer. We were also encouraged to keep an eye out and pray for the star player Courtney Moses, who is also a sister in Christ. It soon became obvious that she is an excellent player as she demonstrated her God given talent for getting the ball in the hoop on top of remarkable sportsmanship. The whole team was such a good example to us of unity and teamwork  and we left the arena inspired after a great effort in victory.

Well, much to our excitement, Pastor Shaw became the second time bearer of great news when he told us that not only have we been invited to attend another Purdue basketball game – this time an NCAA Tournament game – but we were going to have the honor of hosting Courtney Moses for dinner a few days before the game and get a chance to listen to her share her testimony. We had been seeing how much she had been dominating the sports pages and could hardly believe we were going to have her in real life form come and speak with us!

For the days leading up to Courtney coming over, our heads started to brim with questions we all wanted to ask. How tall is she? How does she use her sport to witness for God?  Jen Heikkinen was particularly eager to learn what a ‘free throw’ was. As she arrived we got our first question answered… she wasn’t as short as we originally thought; a 5 foot 7-ish Courtney Moses can be made to look relatively tiny when surrounded by her 6ft-something teammates who tower over the court.  And as the evening went on we learned more and more that Courtney Moses (or C-Mo) was in fact just a regular, down-to- earth, chilled-out 21-year old who is looking forward to graduating college and getting married, and who also had a remarkable passion for using all her God-given talent to glorify the Lord’s name. We all were so excited to see how her main goal in her life was not to win basketball games, or awards or titles (which she has done) but to use her platform to shout out and exalt the name of the Lord. Now that inspired us even more than her impressive accumulation of titles and awards!

It was wonderful to hear how God inspired her right from the young age of 11 as she committed herself to the Lord and to hours of practicing – sacrificing evenings hanging out with friends to pursue a life of godliness and basketball. We can all identify in different ways with these sacrifices and Courtney shows how faithful God is in blessing our efforts.

We are so thankful to Courtney who has now come over twice to answer all of our questions (many of which were as random as you get: “do you like Nutella?” “soggy cereal or crunchy?”) and just hang out! It has been a pleasure getting to know her. We are also so thankful for those who made it possible to have such an opportunity. We are all now diehard Purdue fans and look forward to hearing and witnessing what God has planned in the future for C-Mo.

Having met C-Mo and knowing her testimony, we suspect God’s plan may include basketball but is ultimately much bigger than basketball as He advances His kingdom through this gifted young woman who desires to glorify Him!

-Anonymous Resident at Vision of Hope