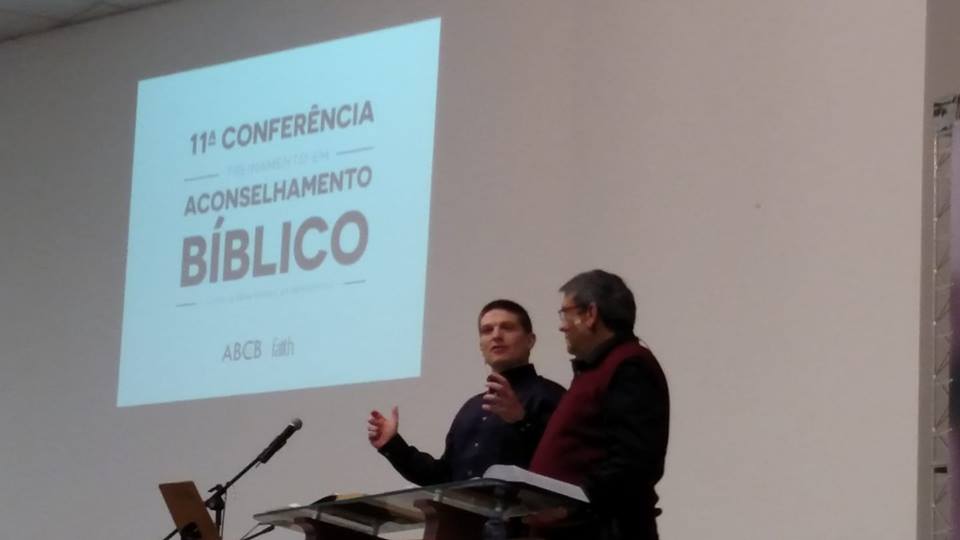 July 28 to August 3, 2018, will be a week I will long remember. I was asked to speak at the ABCB (Brazilian Association of Biblical Counselors) National Conference (note: this link now takes you to the 2019 conference) near Sao Paulo, Brazil. I sent my notes ahead so that they could be translated, I bought my flights, and I prepared for each teaching session. All this was normal. It is what I do every time I have the opportunity to speak in another location.

I knew that the ABCB was continuing to develop. I heard that the conference attracted about 1,000 people. I knew that I would see some of my friends. However, God had more in store for me. There were three unexpected and pleasant surprises.

#1: I loved watching the influence God was giving others.

I do not speak Portuguese. It didn’t matter. I decided to go listen to Sacha Mendes (a graduate of Faith Bible Seminary’s M.Div. program) teach one of his sessions. I have known Sacha for 11 years. He served as Pastor Viars’ translator a dozen years ago. Now he had the platform. Now the Lord was using him to influence and equip the future biblical counseling leaders in Brazil. He had the audience laughing. You could see the intensity, even though I could not understand a word he was saying. I stood in the back and marveled at what the Lord has done with him.

Sacha also wrote a book. In the bookstore it was possible to find many titles of translated works. That is good and it is often where one must start. How much more exciting is it, however, to see books written by Brazilian leaders in their own mother tongue?

I also decided to attend a few minutes of Randy Richner’s lecture (a graduate of Faith Bible Seminary’s MABC program). Randy is an American missionary who has lived most of his life in Brazil. His Portuguese is flawless and even the Brazilians say that they cannot tell by listening to him that he is an American. Randy translated for me on my one other trip to Brazil. This time he had the floor. He taught with such joy and excitement. I am not sure I have ever seen a speaker laugh at his own jokes more than Randy. I found myself standing in the back laughing because he was laughing.

In both cases the Lord honored these men’s patience, training, and sacrificial service. It was a joy to see it and an opportunity to praise the Lord for the ministry influence he was giving my friends.

#2: I loved hearing how this conference impacted Bill Moore.

Bill Moore is retired—sort of. He is 80-years-old and makes 6 trips to Brazil a year. Bill is a former missionary to Brazil. He has one of the most heart-wrenching stories a person could ever have. Bill moved his family to Brazil when he was 38. They lived in some remote parts of the country. One of his young daughters was bitten by a snake and died in his arms before they were able to get the help she needed. He recently wrote a book about that story and it is a powerful testimony of Christ.

Bill and I were able to speak during the conference and he told me (at least 3 times … maybe more) that, “This is my favorite week of the year!”

In his mind, this conference was a dream come true. One evening Bill shared a testimony about the conference and how he hoped that God would raise up biblical counselors and biblical counseling ministries. He was seeing its fulfillment. Bill speaks Portuguese and I do not. I could not understand a word of his testimony. However, I understood the emotion and passion of his testimony.

It was a joy to see that the Lord has given Bill strength not only to see the fulfillment of one of his ministry dreams, but to be a part of that fulfillment. Bill told me that his calendar is booked until 2020— when he is 82! What a testimony of faithfulness and what a joy to watch it first-hand.

#3: I loved seeing the influence of Faith Bible Seminary.

At the end of the conference, the staff wanted to take a picture of all the teachers. As I looked across the stage it was amazing how many people were current or former students of Faith Bible Seminary. Sacha Mendes, leader in Brazil and M.Div. graduate class of 2000. Lucas Sabatier, current Ph.D. student at Southern Seminary and M.Div. graduate class of 2016. I was there and I am the chair of the MABC and the NT prof. Dr. Bob Kellemen was there and he is one of our MABC professors and FBS VP and Academic Dean. Larissa Ferraro is a current student of our MABC and she was giving a lecture regarding her thesis project as was Cindy Richner—another FBS MABC student. Randy Richner is a graduate of our MABC program.

The greatest blessing for me was not being in the picture. It was the fact that God gave me the privilege of influencing others in the picture. These were all former students of mine at Faith Bible Seminary. It was so encouraging to see.

I thought I was going in order to teach … in reality … I was going because God had a few blessings He wanted me to see. One of the reasons we must give the Lord our best is that God may use us to influence others who will influence others also. Surely, 2 Timothy 2:2 really does belong in the Bible…