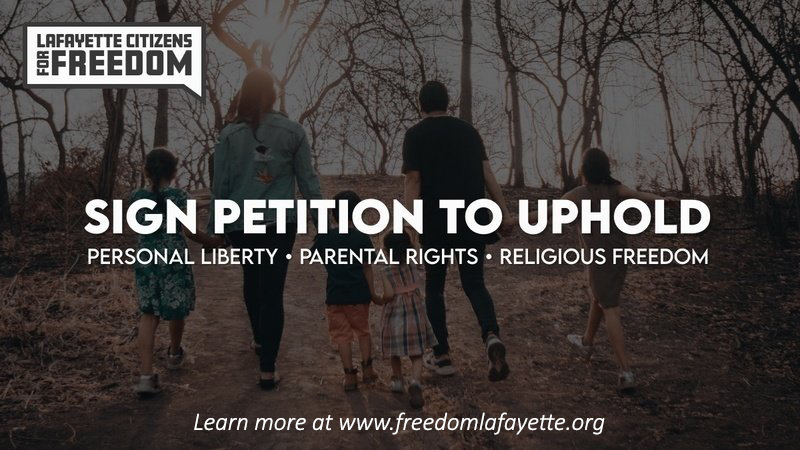 Imagine a scenario where an area teenager voluntarily visits a self-identified faith-based counselor, but because the counselor used the Bible as their source of truth, the local police department imposed a fine of $1000 per day. Sound like a poorly-written plotline from a dystopian fiction flick? Actually, that could be our new reality, courtesy of the West Lafayette City Council and their proposed ordinance 31-21.

Faith Biblical Counseling has existed in our town for the last 45 years and is one of the oldest and largest biblical counseling centers in the United States. Our staff of 32 volunteer physicians, pastors, and other trained men and women are certified by an independent agency but choose not to be state licensed because we want the freedom to clearly share biblical truth with each person seeking our help. We offer 60-80 hours of counseling each week to people in our community free of charge, and the ministry has been so popular over the years that we have always had a waiting list.

31-21 should be troubling to area citizens for many reasons, including the lack of transparency on the part of the city council. As far as we can tell, this is one of the first so-called conversion therapy bans aimed at non-licensed counselors anywhere in the country, yet no one from the council had the courtesy to discuss the matter with us beforehand or seek to address any of their concerns in an open, collegial fashion.

We were tipped off about what the council had been doing behind closed doors for months by a media report just after Thanksgiving. The opposition grew so quickly that a separate organization was formed, the Lafayette Citizens for Freedom (LCF), a broad coalition of churches, campus groups and concerned citizens.

The first question focused on demonstrated need. The city council should specifically state who is practicing so-called conversion therapy in our community. They should explain exactly what these counselors are saying and doing that concerns them. Seven of the nine council members have refused to answer that question publicly. Is this a government solution in search of a legitimate problem? Why won’t the city council answer this simple question?

The next question addressed the issue of parent’s rights. It is stunning that in a piece of legislation supposedly crafted to protect minors, the word “parent” never appears. Will parents now need to check with the government before taking their own children to counseling? Who elected these bureaucrats to practice such obvious governmental overreach?

This sounds very similar to what occurred last fall in Virginia when gubernatorial candidate Terry McAuliffe stated that parents should not be allowed to have a role in determining the nature of their child’s education. Many believe that is one of the primary reasons he lost the election because parents will not be treated in such a dismissive and disrespectful fashion. It appears that what McAuliffe was to education, the majority of the West Lafayette City Council seeks to be to counseling. They have had over a month to clearly state what they believe about parent’s rights. To date, from seven of them? Crickets.

It gets worse. These government officials were also asked about the issue of self-determination. What if an area teenager wants to hear truth from the Bible or some other religious document before making a final decision about human sexuality? Professional counseling standards affirm that it is unethical to deny a person the right to seek the counsel of their choosing. Do our city council members believe they have the right and authority to stand between a questioning person and an individual willing to provide the help they desire? Each of our elected representatives was given a clear opportunity to answer that question. Why won’t most of them answer?

31-21 is also a clear violation of religious freedom and the separation of church and state. When I think of my dear colleagues who have volunteered thousands of hours to serve people in our community now being harassed and threatened by the government for teaching people the Word of God, it angers and offends me. It is amazing that when our city council members were asked to affirm their beliefs in these cherished principles, most of them were unwilling to do so.

Somewhere along the line, the government forgot that we do not work for them, they work for us. It is time to for everyone in our community to stand up for parents’ rights, individual freedom, religious liberty, and the separation of church and state.

Thank God for the internet because now what politicians do in secret, the public can shout from the rooftops. Visit www.freedomlafayette.org and join the thousands of citizens who have already signed a petition to defeat 31-21. Use the embedded tools to send the council members a message asking them to vote no on this measure. Share the blogs and associated graphics so that people in our community are aware of what their elected officials are doing.

Just because many politicians will not practice transparency does not mean citizens can’t or shouldn’t. Let’s come together in the light of day and stand up for freedom.