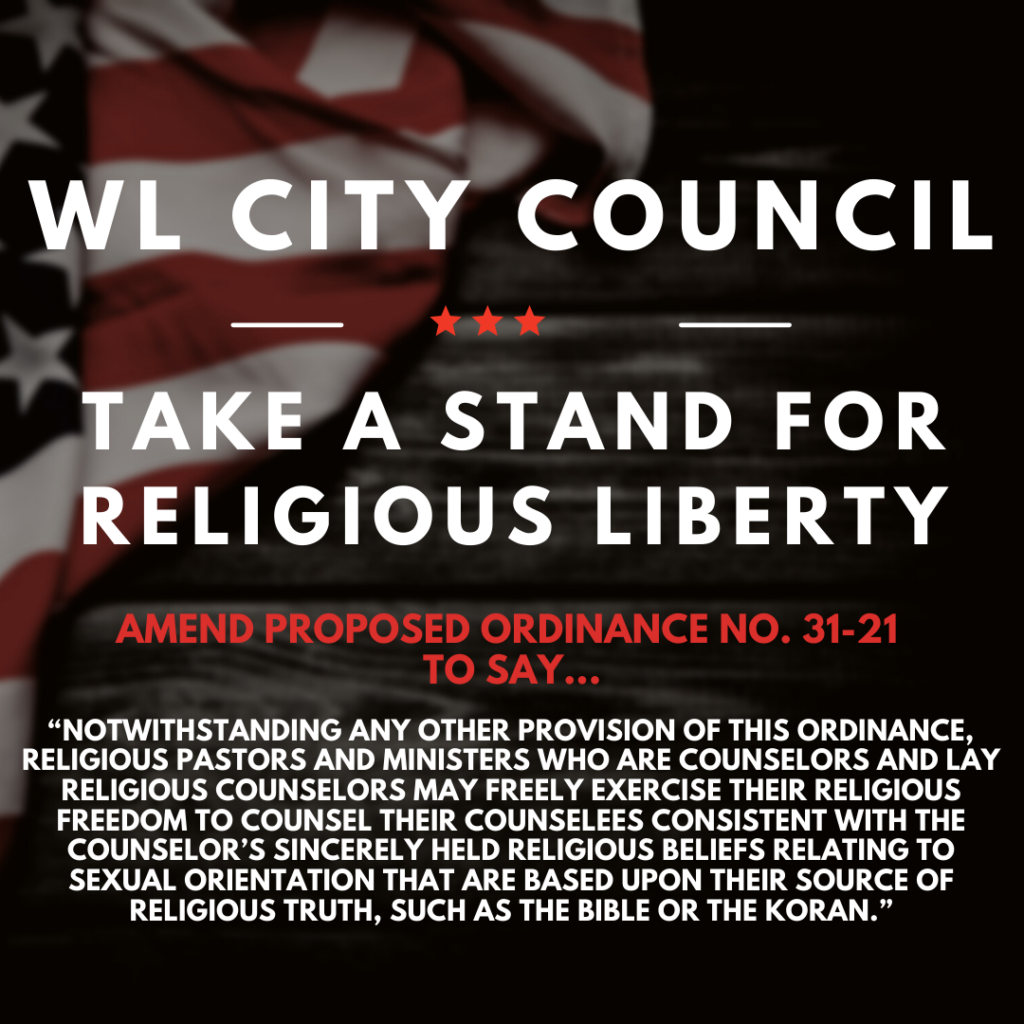 Imagine a world where if a counselor used the Bible to minister to a teenager who voluntarily sought advice about sexual issues, the person could be fined by the police at the rate of $1,000 per day. Does this sound outrageous and impossible in Indiana? This is precisely what could happen if the West Lafayette City Council passes the present version of their proposed ordinance No. 31-21.

Sponsored by City Councilors James Blanco and David Sanders, the legislation takes aim at principles from God’s Word that our church holds dear. It seeks to prohibit “non-licensed counselors” from practicing what the council and others define as “conversion therapy” with minors.

Faith Biblical Counseling Ministries (FBCM) has never practiced conversion therapy or ever used that term. However, because the legislators define conversion therapy broadly as, “any practices or treatments that seek to change an individual’s sexual orientation or gender identity, including efforts to change gender expressions or to eliminate or reduce sexual or romantic attractions or feelings toward individuals of the same gender”, we could possibly be accused of doing some of those things.

While FBCM counselors are certified through a national certifying organization (the Association of Certified Biblical Counselors) they are purposely not licensed with the State of Indiana because we do not want the government dictating what we tell people in the counseling room from Scripture. Since Faith Biblical Counseling Ministry has the largest number of non-licensed counselors in the city, your church’s counseling ministry would be the one who could be most affected if this ordinance passes.

There are numerous passages from the Word of God that are directly in the crosshairs of this definition. For example, consider 1 Corinthians 6:9–11 – Or do you not know that the unrighteous will not inherit the kingdom of God? Do not be deceived; neither fornicators, nor idolaters, nor adulterers, nor effeminate, nor homosexuals, nor thieves, nor the covetous, nor drunkards, nor revilers, nor swindlers, will inherit the kingdom of God. Such were some of you; but you were washed, but you were sanctified, but you were justified in the name of the Lord Jesus Christ and in the Spirit of our God.

When counselees embrace the gospel and use its power to begin a path of change, many things will be converted, including the choices they make with their bodies. For 2000 years, the church of Jesus Christ has upheld the standard of chastity in singleness and fidelity in marriage. These biblical principles are not simply applied to gay or lesbian persons, but everyone who names the name of Christ. As I wrote in a blog post ten years ago when this issue bubbled up in a national conversation, conversion is at the very heart of the gospel message.

The ordinance proclaims that “The City of West Lafayette, Indiana has a compelling interest in protecting the physical and psychological well-being of minors, including but not limited to lesbian, gay, bisexual, and transgender from exposure to the serious harms and risks caused by conversion therapy or reparative therapy by unlicensed persons.”   This means that if parents or counselors wished to discuss a biblical view of human sexuality with their children or counselees, they would be acting in violation of the City of West Lafayette’s so-called “compelling interest.”  As you may have seen in the news recently, a democratic candidate for governor in Virginia suggested that parents were not qualified to influence the curriculum in their child’s schools. Similarly, our legislators seem to believe they know better than parents what is best for their child’s sexual expression.

Those choosing to disobey the City Council in this matter would be fined by the police, “these provisions are exercises of the police power of the City of West Lafayette, Indiana for the public safety health, and welfare, and its provisions shall be liberally construed to accomplish that purpose… Any violation of this ordinance shall result in a fine of $1,000. A separate offense shall be deemed committed on each day that a violation occurs or continues.” Please pause and consider the outrageous nature of that statement. “

There are many reasons to object to this legislation in its present form, but let me list three.

This legislation was drafted with no attempt to communicate with non-licensed counselors in our community. When Faith Church learned about it, I asked the city council members to include language that clearly exempts faith-based entities:

“Notwithstanding any other provision of this ordinance, religious pastors and ministers who are counselors and lay religious counselors may freely exercise their religious freedom to counsel their counselees consistent with the counselor’s sincerely held religious beliefs relating to sexual orientation that are based upon their source of religious truth, such as the Bible or the Koran.”

None of the council members have been willing to commit to this kind of language which is why I am writing to you.

In addition to praying, please consider sending a brief, respectful e-mail to each of the city council members whose contact information is available here. Even if you are not a resident of West Lafayette, your tithes and offerings go to support our biblical counseling center at Faith West.

Would you consider asking the council to either table the ordinance for further consultation or add a clear amendment that comprehensively exempts faith-based entities?

Thank you for your careful consideration of this matter.