This summer at the 2012 Olympics in London, I won a gold medal in the men’s 10m platform diving competition. Those who watched the Olympics know that my path to the gold was a crazy journey. I barely made it through the prelims and then in the finals I stood on the top platform wearing the gold medal representing the USA. I had achieved my life-long dream of winning a gold medal. However, along the way I learned that there is something much more desirable than a gold medal. Psalm 19:10 states about the truths of the Word of God, “They are more desirable than gold, yes, than much fine gold.”

In the many media interviews I have been asked to do now after winning the gold, I don’t normally get the opportunity to explain what the source of peace was that calmed my heart in those last six dives. Yes I have my “hype” music play list and my “calming” music play list on my ipod but there is something else not on an ipod but in my heart that helped me—the Word of God.

My Journey to Christ

I grew up not knowing the Gospel of Christ found in the Word of God, until my coach Adam Soldati and his wife Kimiko began pouring into my life during a time of distress my sophomore year at Purdue. I had bought into the typical college student deception that everything in college and my athletic career was about me. That lifestyle became so depressing that I desperately needed something else to live for. I was longing for some type of purpose.

Through Adam’s faithful friendship in ministering the Word to me, I came to know Christ. I began to be discipled in my walk with Christ. I also sought out biblical counseling. Slowly and not always consistently, I began to realize from the Word of God that my purpose in life as God’s child was to live for Him and others—not myself. Living for David’s fame and David’s pleasure was one of my biggest problems in the 2008 Beijing Olympics and was the cause of my deepest moments of despair.

My Growth in Christ

Over the last four years I have had my spiritual peaks and valleys. This summer, knowing what I was going to be facing at the Olympic games, I really wanted to grow in trusting God’s plan for me. I wanted to learn to be content in every situation. God had not promised me a gold medal. But I was learning from God’s Word that He did promise me that whatever happens, He is working for my good and His glory.

From an athlete’s perspective, the Olympics are the highest pinnacle in an athlete’s career. Athletes train their entire lives for these two weeks. Specifically, in the sport of diving and my event in particular, the Olympic Games boil down to a whopping 8.52 seconds. A diver performs six dives in a competition format. A dive takes approximately 1.42 seconds. So that means I spent 4-5 hours a day, 5-6 days a week, and approximately 300 days a year training for 8.52 seconds. Talk about pressure. And, on top of that pressure, millions of people are watching those 8.52 seconds. Talk about anxiety. I was ripe to be a nervous wreck.

In the individual event, I went into prelims very confident (if not arrogant) that I would make it easily into the semi-finals the next day. There were also expectations for me to be in the top three that I allowed to consume my thoughts before and during the competition. Thinking those thoughts was, for me, believing a flat out lie. In reality, there are no guarantees because I am not in control—God is.

After round 5 of 6, I found myself on the cut line to not make it back the next day. During round six all I had to do was do a “normal” dive to make it. God had a different plan for me. After the completion of my dive I went up to my coach, Adam Soldati and said, “This is where my journey of the Olympics ends, tonight.” Those words showed my lack of trust, not because I was expecting the worst, but because I was believing lies instead of trusting in God’s sovereignty. After walking back into the warm-up room, I stood there and prayed. Not that I would make it in, but that I would humble myself. “Your will be done, whatever that may be. Just allow me to accept Your will, humbly, and rely on You instead of myself. Allow me to be content with what You choose to do because ultimately I know You will use this situation to make me more like Your Son, Jesus.”

I had a long wait to see if I would make it to the next phase of the competition. But, I was ready to face whatever God had planned After barely squeezing into the semi-finals, I knew that God was in control. He allowed the “defeat” of barely making it into the semi-finals to conform my thoughts to be more like His. I went to bed that night and cried out in desperation, just asking God to allow me to stop clinching on to this competition so tightly and to just allow me to glorify Him throughout it.

My Confidence in Christ

The next night at the Olympic finals, I was sincerely trying to trust God no matter what. I was rehearsing in my mind Phil 4:6-9 and Romans 14:7-9 “For not one of us lives for himself and not one dies for himself…for if we live, we live for the Lord…” The peace of God was guarding my heart and my mind throughout those final six dives. By His grace, I was able to approach the Olympic finals relying on truth from His Word,

The result? Well… a Gold medal, yes…but ultimately something that is so much more 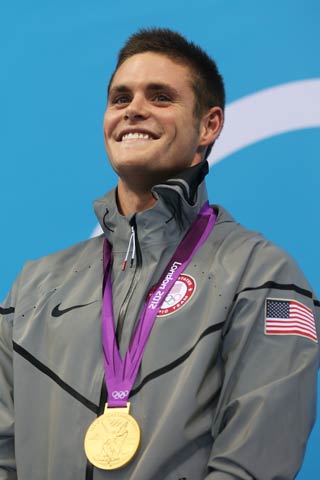 Finally, I leave you with wisdom from another brother in Christ who texted me before the Olympic finals. They are simple words, but they have so much truth in them because they are based upon the Word of God.

“What is there to be anxious about? God already knows the outcome; you’re just the vehicle for His Glory. Go out there and do what it takes to glorify Him.”

The Word of God is “more desirable than gold, yes, than much fine gold” – even the gold of an Olympic medal.

Jeremy Vegter
Jeremy joined Faith's staff in 2012 and oversees Faith websites, social media and multimedia production. Jeremy also serves as the Caleb's Kin Director and the Senior Living Community Coordinator in which capacity he and his wife, Alisha, and their two boys, Joel & Josiah, enjoy serving the senior citizens in their church and community.