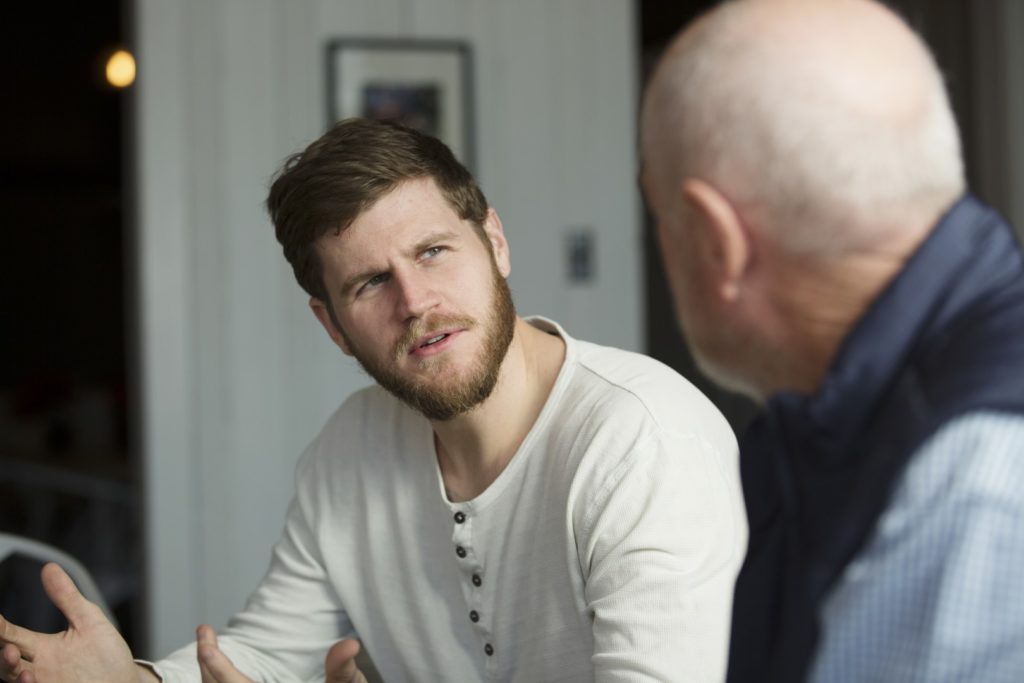 Do you ever have those moments where you think of how you should have responded—three weeks after you had the conversation?? I had one of those moments recently…

I was talking with a young man who had recently gone back on his profession of faith in Jesus that he had made when he was younger. Like many, he had seen, experienced, and caused a great deal of suffering that eventually led him into the classically affiliated pitfall: “I don’t see how God could exist with so much suffering in this world…” My response didn’t come until a few weeks later when I was reading in the Bible with my kids.

But, before I state my belated response, it’s necessary to give a little bit of background to the problem this young man is wrestling with…

Suffering and brokenness are no surprise to God. In fact, He promised that death (the apex of suffering) would be a result of disobedience, even before the fall of mankind (Genesis 2:17). But, after our first parents engaged in that initial human act of disobedience, God spoke the protoevangelium,

This statement wasn’t just the promised hope of redemption for mankind. This prophesy was the first of many that would describe what would happen to this “seed”, this Messiah: He would suffer. Leviticus, Psalm, Isaiah, and Zechariah would also paint a vivid picture of this suffering servant to a world steeped in brokenness.

It’s impossible to give Scripture an honest read and walk away thinking it attempts to veil pain, suffering, and wickedness. There is murder, destruction, slaughter, deception, incest, adultery, betrayal, hate, loss, anguish, and so much more—in the first book alone. Pain is an authentic reality, suffering is capable of descending into the darkest of valleys, and the wickedness that we brought about by the fall ought to be combated.

We see this all in Scripture. God doesn’t pretend suffering isn’t there. In fact, He goes a step further…

…Christ Jesus, who, though he was in the form of God, did not count equality with God a thing to be grasped, but emptied Himself, by taking the form of a servant, being born in the likeness of men. And being found in human form, He humbled Himself by becoming obedient to the point of death, even death on a cross (Philippians 2:5-8, ESV).

I’m not sure what heaven is like. In fact, the thing I am sure about, is that I can’t even begin to fathom how awesome it is (1 Corinthians 2:9). But Jesus did the unthinkable: He left the unimaginable pleasures of heaven to redeem a lost people.

The almighty, everlasting God is not only aware of our mess—He entered into it. While on this earth, He was described as “a man of suffering, and familiar with pain” (Isaiah 53:3 (NIV)). And that’s how He is described before His suffering on the cross. The more I dwell on the truths Philippians 2:5-8 reveals, the less sense this exchange makes to my fallen logic. Conversely, the more I think about what He did, the clearer it is how wrong a statement like the one our young friend made truly is…

You don’t see how God could exist with so much suffering in this world??

“We must not be talking about the same God…”

My God left heaven to pay a debt He did not accrue and endure suffering that my ancestors and I caused. My God lived a life of pain and sorrow. My God was betrayed, abandoned, beaten, falsely accused, and relentlessly mocked. My God was tortured, then murdered. My God absorbed the incomprehensible force of eternal wrath on my behalf. Is this the same God you are talking about?

It may be helpful to know that I have spent many hours walking alongside this young man in his hurt and suffering leading up to him making this statement. While theological truth and the gravity of Christ’s suffering is eventually needed, it’s not always the most helpful place to start. Job’s friends remained silent for a full week before they began their discourse—flawed as it was. As Theodore Roosevelt is believed to have said, “People don’t care how much you know until they know how much you care.”

Perhaps someone you know has a similar question as this young man. Scripture gives us helpful guidelines on how to address people differently, depending on what they are experiencing and how they are choosing to respond:

…admonish the unruly, encourage the fainthearted, help the weak, be patient with everyone (1 Thessalonians 5:14).

When we scramble the order of this passage, we can actually add suffering to the sufferer or even encourage sin. We can also lose opportunities to present the gospel to those who desperately need it.

But even in the midst of a fractured world—one that our Creator chose to step into—Christians are encouraged to fix our gaze toward heaven:

For I consider that the sufferings of this present time are not worthy to be compared with the glory that is to be revealed to us (Romans 8:18).