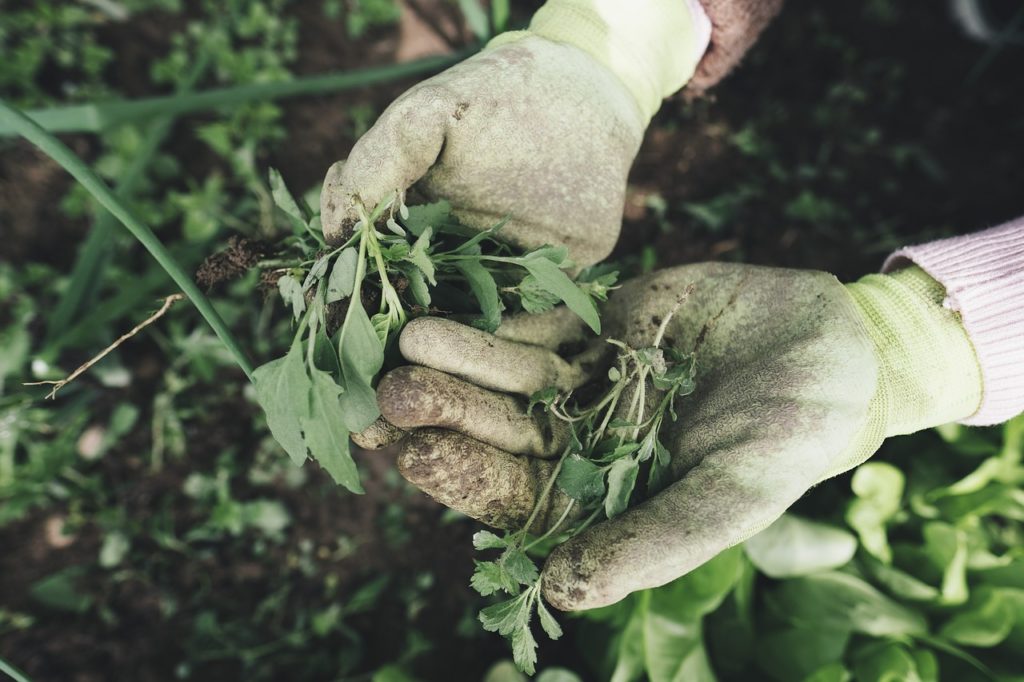 We have had a lot of rain this season. This generally means that our lawns are green; plants are growing. It also means that weeds are growing. Weeds grow right along with the grass, flowers and any other seeds that have been planted.

Sometimes it’s difficult to get rid of the weeds without also hurting some of the plants you actually WANT to grow.

Jesus told a similar story in describing life in the Kingdom of God. It’s a story that is meant to teach us something about the reality of living in this world.

The Parable of the Weeds

Jesus told them another parable: “The kingdom of heaven is like a man who sowed good seed in his field. 25 But while everyone was sleeping, his enemy came and sowed weeds among the wheat, and went away. 26 When the wheat sprouted and formed heads, then the weeds also appeared.

27 “The owner’s servants came to him and said, ‘Sir, didn’t you sow good seed in your field? Where then did the weeds come from?’

“The servants asked him, ‘Do you want us to go and pull them up?’

29 “‘No,’ he answered, ‘because while you are pulling the weeds, you may uproot the wheat with them. 30 Let both grow together until the harvest. At that time, I will tell the harvesters: First collect the weeds and tie them in bundles to be burned; then gather the wheat and bring it into my barn.’”  (Matthew 13:24-43  NIV)

Remember Jesus was telling a parable. All of this would have been common knowledge to Jesus’ audience.

The Parable of the Weeds Explained

Then He left the crowd and went into the house. His disciples came to Him and said, “Explain to us the parable of the weeds in the field.”

40 “As the weeds are pulled up and burned in the fire, so it will be at the end of the age. 41 The Son of Man will send out His angels, and they will weed out of His kingdom everything that causes sin and all who do evil. 42 They will throw them into the blazing furnace, where there will be weeping and gnashing of teeth. 43 Then the righteous will shine like the sun in the kingdom of their Father. Whoever has ears, let them hear.”  (Matthew 13:36-43)

This parable is clear. We have 7 images in this parable: the sower, the field, the good seed, the weeds, the enemy, the harvest and the reapers.

Jesus decodes each of the seven images.

What Should We Do About the Weeds?

We generally pull the weeds, spray with Round Up – figure out how to get rid of them. But it is important that we understand their source and know their destiny.

The weeds in our life are planted by whom? The source is the Devil.

What is the destiny of the devil? Hell forever

Satan has been God’s enemy nearly from the beginning. Satan has sown weeds in the field of the world. He has probably planted some weeds in your life.

The devil puts bad things in our life on purpose. He did this with Adam and Eve. He did this with Job in the Old Testament and he continues to do it to us today. The devil would like more than anything else for it to take root and grow – take root meaning establish itself in our lives and be a strong presence.

Maybe you have heard people use the phrase – “they come with baggage” or “he has a lot of baggage.” What they mean is that their pasts are full of painful things that have happened to them and they seem to be carrying it with them throughout their lives. They carry it with them either because they can’t let it go or don’t know how to let it go. Frequently, others make it difficult for them let it go.

We all have a baggage journey. It could have started early in life and it can still happen later in life; we carry it with us, and it weighs us down. Like the weeds we need to get rid of it.

The parable of the weeds tells us that the devil is putting the bad seed in our lives. He is planting. He sneaks in. He has bad intentions. This bad seed turns out to be baggage in our lives and we must figure out how to get rid of it. We must separate the weeds from the wheat.

The Bible tell us HOW to Deal with our Baggage.

1. Baggage comes from the Enemy, the Devil.

First Peter 5:8 says, “Your adversary the devil prowls around like a roaring lion, seeking someone to devour.” That’s a little dark to put in a letter meant to bring people hope, but it is reality. Many of you have baggage and can’t even identify that it comes from the Enemy. We have one enemy, the Devil. Yet, we have hope in what’s next…

2. WE can resist the Devil.

We learn that all Christians suffer, but Christ is bigger than the suffering. If you struggle, you’re not alone!

3. Humility is the key to losing our baggage.

What is humility? I used to think of it in negative terms, but as a Christ follower I think differently. The dictionary defines humility as, “a modest view of one’s importance.” We are humble when we realize we aren’t the most important thing in the universe. It also means that we can’t lose our baggage all by ourselves; we need divine help. We need help from God.

First identify your baggage. Then, realize you can defeat the Enemy when you become humble and recognize the need for Jesus to take control of your life.

Check this out! 1 Peter 5:10 says that after we have suffered for a little while, the God of all grace, who has called you to eternal glory in Christ, will Himself restore, confirm, strengthen, and establish you.

Let Jesus be the Roundup for the weeds in your life. Lay your baggage at the foot of the cross so that you are free to live! Remember the words of John: The thief comes only to steal and kill and destroy; I have come that they may have life and have it to the full (John 10:10).

Photo by Anton Murygin on Unsplash

Bob Anderson
Pastor Bob is married to Heather and they have two adult children Tori and Hailey. Bob’s primary function is to oversee the Faith Church North Campus, the Hartford Hub, assist with the Northend Community Center and the respective community ministries and programs. Bob has spent 20+ years in student ministry and is the founder of an urban ministry in Chicago reaching teens. Bob has authored 14 books/booklets.