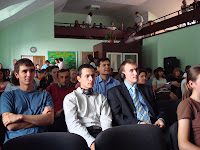 Biblical Counselor Training modular course for students of the College of Theology and Education in Chisinau, Moldova

We conducted sessions for track one and track two at the college. For track two we had simultaneous interpretation into Romanian and Russian. Those listeners who preferred Romanian listened with wireless headsets.
Track one was divided into two classrooms for the new students, one in Russian and the other in Romanian. We taught four sessions a day followed by a Question and Answer session before supper.
The college is deliberately “missionary” in nature providing scholarships to many students from other countries who are unable to pay for the education. As a result many of the students had to miss sessions for government-required medical screenings, English tests, etc. We may change the schedule next year to have the modular course the second week of school instead of the first.
Some of the testimonies of the students were incredible. One young lady said that she had heard of the College of Theology and Education in Chisinau four years ago. She prayed that God would allow her to attend and would provide a way for her to do so. After four years of prayer God took her to CTE in Chisinau! She gives God the glory for providing for her to attend the college and wants to learn all that she can before she returns home to minister among the large number of orphans in her country.
It was only about a 15 minute walk from the campus to downtown Chisinau so we had opportunities when we were not teaching to walk into the city and take a look around. That was the only exercise we got this week.
We stayed in the homes of Valeriu Ghiletchi and Mihai Melancea. It was nice to stay with the families but it seems we might have connected better with the students if we had stayed on campus with them to be accessible in the evenings.
Faith Global Ministries is a ministry of Faith Baptist Church of Lafayette, IN.