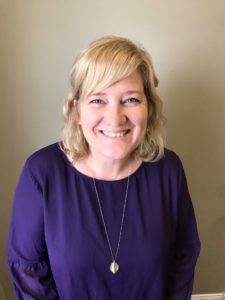 Elizabeth Kinlaw started serving as an intern at Vision of Hope in 2015. She grew up in Raleigh, NC, and graduated from the University of North Carolina at Wilmington with an education degree. After being involved in ministry for high school girls, she realized that she loved to teach. She ended up teaching elementary school for six years after graduating. In her free time, Elizabeth loves spending time with her family, watching college basketball, and studying the Bible. Her favorite Bible passage is 1 Peter 5:10. She loves 1 Peter because it was the first book she ever studied as a believer, and it is full of hope for suffering people.

Elizabeth was led to Vision of Hope after she had been teaching elementary school. She did informal counseling with the kids she taught and felt very ill-equipped to help them. Eventually, a good friend of hers took her to a biblical counseling conference in 2012. She comments, “That conference changed the course of my life. I remember being so amazed at how the Bible had answers to life’s problems! I was amazed at how they used the Scriptures to minster to my heart and I was hooked.” She had been working with a group of girls that had deep issues and she did not know how to help them. She states, “I remember thinking to myself, I wish I could just buy a big house and have them come live with me so I can help them understand who God is and how following Him could truly set them free. An hour a week just wasn’t enough time to walk alongside and help them.” The conference she went to had a session that mentioned Vision of Hope and she knew that that was what she wanted to do. She started her ACBC certification process, and eventually she was considering buying a house and asked the Lord if this was what He wanted her to do. A few days later, a friend mentioned the Vision of Hope internship to her again and she knew that God was directing her to the internship instead. In February of 2015, she applied and within a couple of weeks she was accepted and on her wayto Vision of Hope. In 2016, she became part-time weekend staff and in 2017 she was hired on as full-time shift supervisor and counselor. She also took over running and planning fundraising events.

Vision of Hope, since she began working in 2015, has changed Elizabeth’s life in many ways. She states, “The internship was one of the hardest things I have ever done but also one of the most rewarding things I have ever done. My heart was being exposed in new ways and I was trying to help others as their hearts were being exposed. . .The biggest thing I learned is my utter dependence on God alone. I was put in situations where I had no idea what to do—it was uncomfortable to say the least. But I learned that when I entrust myself and whatever I am doing to the Lord, He will establish the work of my hands (Psalm 90:17).” As a counselor, she pours her heart and soul into each lady and loves to see them progress through the program and graduate.

Elizabeth is super thankful to be part of the life-changing hope that the ladies find in Christ at Vision of Hope. If you would like to be part of the change as well, Elizabeth strongly urges you to consider getting involved with our Race for Hope and make a contribution to our ministry today!

Sydney Hopkins
Sydney was first introduced to Vision of Hope's ministry through the Biblical Counseling Training Conference. Eager to learn more about ministering God's truth, love, and comfort to hurting women, she joined the team as an intern in July of 2018. She is thankful to now serve as a staff member sharing the hope and comfort she has found in our Savior and His sufficient Word.

A Plea for Civility in Public Discourse
May 2, 2022
Faith Kids @ Home: May 22, 2022
May 21, 2022
How Seeing Repentance as a Gift From God Helps You in Counseling
May 17, 2022
Church
Community Ministries
4:Twelve Student Ministries
Global Missions
Faith Kids
School
Counseling
Vision of Hope
Seminary