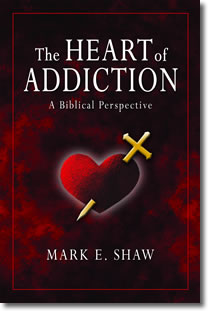 The desire of my heart was to write a resource that a local church could use that would match the Gospel message preached in the pulpit: Jesus Christ forgives repentant sinners! I was saddened that most “addicts” and “alcoholics” (as the world labels them) remained enslaved to sin with those labels. Until one confesses sin and repents by turning to Christ alone for eternal life, there is no hope. However, when we call our sin “sin” as God does, then we find mercy (Prov. 28:13) and hope for the addict which was the primary reason I wrote The Heart of Addiction which is my best-selling book to date.

Years ago, my mentor and professor, Dr. Howard Eyrich, nudged (ok, he pushed me) into writing. I wrote The Heart of Addiction and a small booklet on marriage. We submitted the booklet to Focus Publishing and it was published in 2006. I soon wrote 2 more booklets and a small book called Divine Intervention: Hope for Families of Addicts for Focus Publishing, too.

Originally, The Heart of Addiction was published by a local company in Birmingham, AL, in 2006. It was even revised by that company soon after. I realized quickly how much work goes into producing a resource. Writing a book seemed so easy: “Just put my thoughts down and send it in” or so I thought. But editors re-work your material and I had to re-read and re-work their re-writes to be sure they remained theologically sound. I didn’t want to inaccurately teach the Word of God. Nothing could be worse!

In 2008, the Focus Publishing version of the book was produced. Having already experienced some of the heartaches of criticism, I still was not ready for the variety of responses to this book. Some criticized it as being too harsh. Others said it was “self-loathing” and not self-loving. Still others criticized the lack of acceptance of the 12 Steps and the disease concept of addiction (which is a theory not scientific fact). Those things are sad to read in an email or to hear in person by a vocal critic. But I didn’t write it for man’s approval (Gal. 1:10) but for God’s glory in that I wanted to be faithful to His Word and proclaim His excellencies (Col. 1:28).

While that response was not unexpected by those who do not like to confess sin but prefer to re-label sin into a disease, the response from many truly Christian addicts was astoundingly positive! I began to read emails sent by persons who had been saved by grace through faith in Jesus Christ. Wow! I had not expected that though I should have. I simply was naïve to the power of God through a written resource – especially one written by an unworthy, sinful yet redeemed man like me. That God would use me in that way was humbling. I truly was an instrument in His capable Hands. One man wrote that he read the book and stopped using drugs that day!

Then, churches began to ask me to come and teach on addictions. I was honored but frankly, it was overwhelming. I accepted those offers almost every time because I was (and still am) passionate about proclaiming that the Gospel message is the only hope for those enslaved to life-dominating sin such as drunkenness, idolatry, and what the world calls “addiction.” The majority of those workshops were well-received but there are always two or three in every crowd who believe (and it is a belief and an issue of faith not fact) the disease concept. Some would approach me in the hallway at the break. Others would stand up, make loud noises and snort as they walked out of the auditorium. It always broke my heart that persons would be that hardened to the truth of God’s Word. One man defended the 12 Steps more than he defended God’s Word. It was truly sad to witness.

Now, I simply am thankful to Christ for allowing me the privilege to carry the cross and to be shamed by those holding onto secular beliefs. I am truly honored to know that churches around the country are using this book and my other ones in group settings like Celebrate Recovery meetings, church Sunday school classes, small group meetings, and even citing it from the PULPIT! Yes, the pulpit and the reason pastors can use this book in the pulpit is simply because it upholds the truth of the Scriptures and it does not oppose the Bible. The book addresses sin in one’s own heart and leads to real hope out of any addiction through the power of the Holy Spirit and God’s Word working through a local church family of Christ. It’s a message that faithfully holds to the principles of truth found in God’s Word and presents the true Gospel: Jesus Christ saves sinners like those in the throes of addictive, sinful behavior when they confess and repent turning to Him alone by grace through faith (Eph. 2:8). What good news God has entrusted to us and what a responsibility we have to share it with others!

-Pastor Mark E. Shaw (grateful that God has used and will continue to use this resource as He sees fit)

Mark Shaw
Mark Shaw has 22 years of counseling experience working in a variety of settings including faith-based residential programs, dealing with issues surrounding “addictions” of all types, and supervising staff positions. His experience in the biblical counseling field began in 2001. He has written 14 published works including The Heart of Addiction; Relapse: Biblical Prevention Strategies; Divine Intervention: Hope and Help for Families of Addicts; Addiction-Proof Parenting; and Hope and Help for Self-Injurers/Cutters. He also co-authored a chapter in Christ-Centered Biblical Counseling (2013).