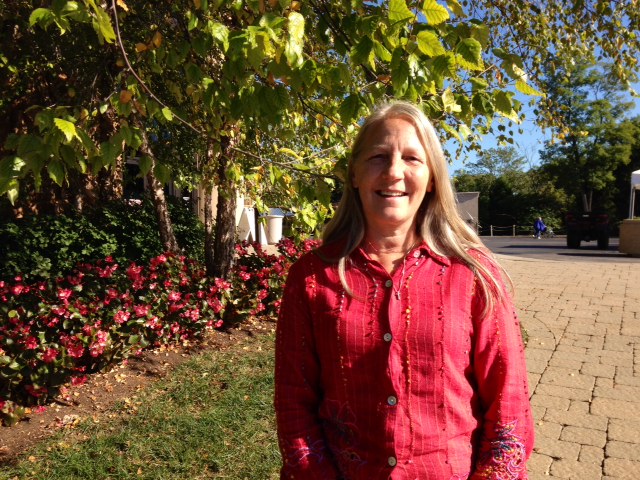 Today, I’d like to introduce you to one of our “Robin” interns, Julie. She joined the intern team in July 2013 (as opposed to our “Batman” interns, who joined the team in January 2013). Before long, a “mother figure” role of sorts was bestowed upon Julie by both the interns and residents. For one, Julie has a lot of wisdom to share and is nurturing in spirit, though she is quick to redirect praise to her Savior. “It’s all God… everything He does is awesome.” In addition to spiritual direction, Julie also embraces a motherly role in her physical direction: Fifteen years separates a 52 year old Julie from the next oldest intern, Jenni (whom you met last week). You may be shocked, as was I, that a woman in her 50s would choose (CHOOSE!) to leave her hometown of Glover, Vermont and move into a house with 12 young women, to work with young women! Well, maybe I should rephrase: it was God Who chose the path, Julie simply chose to obey.

Julie was saved at 45 years of age; saved from a life of drinking and drugs that originated from 6th or 7th grade. It was Teen Challenge that first showed Julie the power of God’s Word. Julie wanted to get sober, but more than that she wanted to know God. She started attending the BCTC with her church each year. In 2006, Julie toured Vision of Hope and couldn’t get the idea out of her head. “We need to be doing this back home for women,” Julie thought.

Julie went back to her hometown in Vermont and spoke with her pastor about starting a home for women. “[I wanted] a place where they could come and live with me, learn about God, and stay off drugs.” The excitement was there, but the finances were not: Julie was in debt. “I made a promise to the Lord,” Julie remembers, “I want to serve You, but I need to get out of debt.” Through God’s leading, Julie sold her home to reckon her outstanding debts, and invested the excess in a “God account” to be used however He would see fit.

With God’s leading, Julie went and talked with her church about starting a women’s home, and they accepted the proposal! Four years after she caught the vision  at Faith’s BCTC, Julie officially opened “Hearts of Change,” in 2010. “There were a lot of fails,” Julie admits, “I didn’t know what I was doing, but I just wanted to try.” About 20 women and 15 children have gone through Hearts of Change since its opening.

While her NANC certification gave her some direction in the Hearts of Change ministry, Julie recognized she would benefit from some additional training on discipling women and simply managing a household. Her Pastor suggested the internship at Vision of Hope. Julie thought it was a GREAT idea, but for whom? She never thought her pastor was actually asking HER to go! Though doubting, Julie believed the call of God to “take up [her] cross and follow,” and began the application process in Feb. 2013. “God knew I needed that training, to be better equipped.”

When I asked Julie about her experience so far as an intern, one word stood out: “LOOOOOVE.” Julie loves how coming to Vision of Hope is like having a “brand new family… the people here are so full of love and grace.” Another major theme of Julie’s intern experience is repentance and change. The need for change and repentance is especially evident in a house full of diverse women. “We start living together and we start seeing things… [God] called me to repentance in [those] things….” Julie is no stranger to obeying God’s Word, and had to take a hard look at her agenda and preferences as an intern and housemate. “I walked around that pond in repentance and tears,” Julie says, speaking of the circular path of concrete outside VOH and the community center. The interns often trek “around the pond” to process God’s teaching. Julie is so thankful that God gave her a whole YEAR to learn all of what He has to teach her. “To change, to grow, to learn… talk about amazin’ blessin’.”

One thing Julie wants to say about the internship is how overwhelming it felt at first. When you arrive as an intern, you are immediately thrown into intensive training about the policies and procedures, and you begin shadowing your shifts. After two weeks, you’re handed your name tag and you’re an intern! It’s definitely a crazy, uncomfortable whirlwind; but worth it. In Julie’s words, “Thank God He doesn’t let me get out of these things.”

Julie also wants people to know that you don’t have to be “special” to come and intern at Vision of Hope. “You don’t have to come and have ambitions of starting a women’s home someday. You can just come and help. [The internship] is for any kind of girl who wants to love and serve and grow in the Lord.”

In the future, Julie wants to tailor her internship to best glean and learn from Vision of Hope. Whether that’s sitting in on staff meetings, shadowing certain staff members, volunteering as secretary, or whatever; it doesn’t matter, Julie wants to learn and serve as much as she can. “I don’t want to waste any of my time here,” Julie resolves. When she’s done with her internship, Julie plans to return to Vermont and “start over” with Hearts of Change, employing all the lessons and strategies she’s learning from Vision of Hope.

One passage that has meant a lot to Julie during her internship is Phil 1:6, which says,

“Being confident of this, that He who began a good work in you will carry it on to completion until the day of Christ Jesus.”

“He finishes what He starts… that’s what this [the internship] is for me. There’s a lot of truth that I can’t do things.. but His truth is greater.”

Rachel Bailey
I began my internship with Vision of Hope in January 2013. In my current understanding of God’s will for my life, I am pursuing wisdom and experience to one day work with women with eating disorders. My desire is to plant my feet in truth, while reaching my arms as far as I can toward the broken and hurting. With God’s help and guidance, I hope to become a godly woman and counselor to provide Truth-based counsel rather than “evidenced-based practice.” My life verse is Ecclesiastes 5:7 which says, “For in many dreams and in many words there is emptiness. Rather, fear God."

Faith Kids @ Home: May 15, 2022
May 14, 2022
A Plea for Civility in Public Discourse
May 2, 2022
How Seeing Repentance as a Gift From God Helps You in Counseling
May 17, 2022
Church
Community Ministries
4:Twelve Student Ministries
Global Missions
Faith Kids
School
Counseling
Vision of Hope
Seminary