Fundación Red Misericordia is a private orphanage overseen by Senora Olga Arocha.  The Fundación currently has three orphanage homes where the children are provided and cared for in a Christian environment. A larger facility to house all the children in one place is under construction.

Our team spent the week in the various homes getting to know and ministering to the children. Each of the team members fell in love with one or more of the children and wanted to take them home to the U.S. 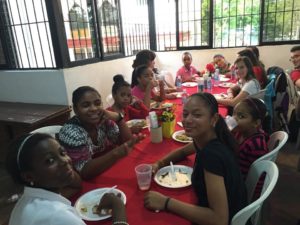 I remember one evening before going to the mid-week service at Iglesia Bautista de la Gracia, we had supper in the home for girls ages 12-16. I put myself in the middle of a table surrounded by the orphan girls since I speak a bit of Spanish and did not need an interpreter. We asked one another lots of questions about one another and pretty soon I had my iPhone out showing them pictures of my family. They especially liked seeing pictures and videos of my grandchildren.

There was a lull in the conversation and the girls seemed to be talking quietly among themselves. After a bit, one of the girls asked me, “How many grandchildren to you have?” I responded, “I have two,” to which she said, “No. You do not have two grandchildren.” We went back and forth a few times and I though perhaps I was saying something wrong or misunderstanding her statements. Then the girls all started giggling and she said, “You have 18 grandchildren!”

The girls had all decided they would adopt me as their grandfather and they began calling me Abuelo (Spanish for grandfather). It was not long until they called me Abuelito, an endearing term for grandfather. The rest of the week my 16 new granddaughters would call out to me anytime they saw me, even if I was across the street. When we met, I received big hugs and smiles just as though they were family.

We were able to influence a number of the children, teaching and ministering the Word to them and sharing the love of Christ by spending time with them. Everyone on the team of is looking forward to returning next year to serve in the new facility they are building to house all the children.

They are in great need of a some TEFL (Teaching English as a Foreign Language) teachers. If you would be interested, contact me through www.FaithGlobal.org.