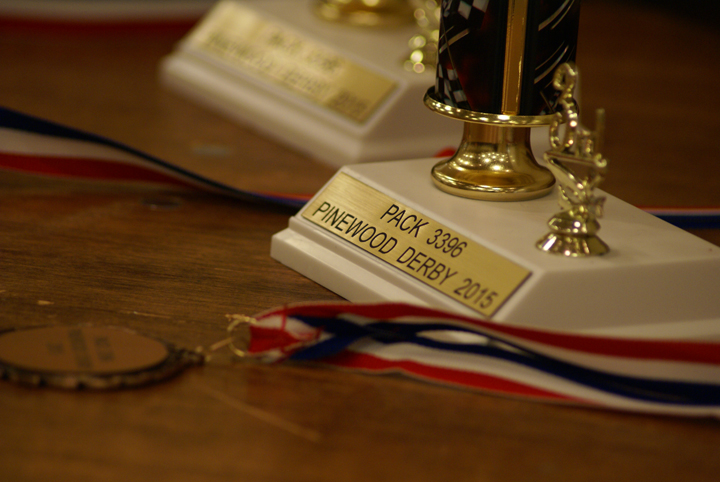 The smell of buttery popcorn filled the air, but that wasn’t what created the warm environment in Faith Community Center. It was the excited buzz of chatter from young boys, the families gathered together with genuine cheerfulness displayed on their faces.

Today is the Cub Scout Pinewood Derby Race of Pack 3396. This boxcar race is a scout tradition that has taken place all over the country since 1953.  Cub Scouts take a block of wood and with the help of a parent or an Akela (“good leader,” which can be a parent, teacher, religious leader, a Cub Scout leader, or another type of guide who has agreed to take the position of helping the scout with harder tasks1), they fashion a box car that weighs no more than five ounces. The top three winners of today’s race will go to a district race, held at Tippecanoe County Mall; the winners of that race will go to a state race, and from there to a national pinewood derby race.

Cub Scout Pack 3396 is a fairly new pack that began in August 2014. This pack is part of a larger organization called the Sagamore Council, which consists of 16 counties and 4500 kids. Cub Scouts are generally associated with churches, schools, or community organizations; Pack 3396 is hosted by Faith Christian School (FCS). They meet every Tuesday evenings, and there are regular meetings for parents and representatives from FCS.

This is the first derby race for Pack 3396. Besides the anticipation of a chance to race on the next level of competition, the Cub Scouts present have also earned their Wolf Badge. This badge is achieved by making something functional out of wood with hand tools.

Allen Nugent is the leader of Cub Scout Pack 3396. Nugent had not originally intended to lead this pack, however, his enthusiasm for what the scouts stand for brought him to the position of Cub Master. Nugent said he is passionate about the boys’ walk with Christ and for “their faith to be external and not internal.” With his own personal experience with Scouts, he focuses on helping his Cub Scouts to grow in leadership, caring about those around them, and “encouraging men to be men.”

“The life lessons they learn here are awesome,” said Nugent.

As each boy arrived, they were able to do one test run for their box car before handing it in to Assistant Cub Master, Michael Ivy.

Eric Seubring, who helped host the pinewood derby, led the opening ceremony. This is his 6th time organizing a race for Scouts. The event began with the pledge of allegiance to the American flag, followed by Seubring explaining the rules and guidelines for the race. He stressed the importance of the boys to be good sportsmen. “That means we win gracefully,” he explained, “And we lose gracefully.” 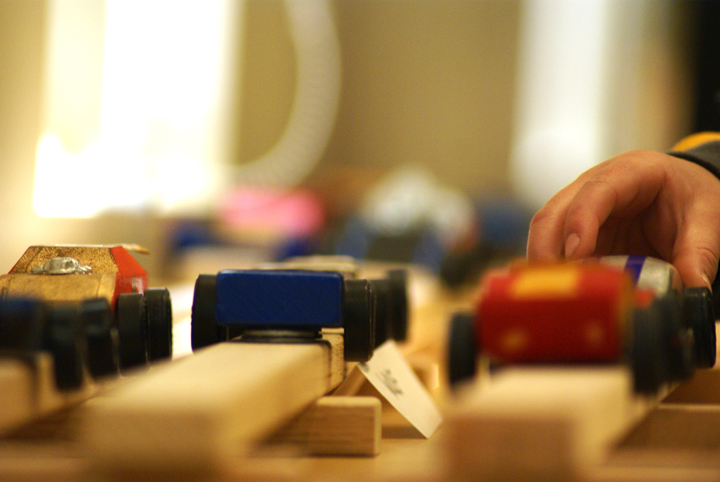 “What are we racing for?” Seubring asked the boys.

“To have fun,” Seubring reminded them.

Cole Seubring, who is helping the Cub Scouts today in the Pinewood Derby Race, is the Den Chief of the Cub Scouts; a Den Chief is a privileged opportunity for an older Boy Scout to serve the Cub Scouts with whatever is needed. “I just ask what needs to be done, and I do it,” he explained.

“Boy Scouts has given Cole a lot of opportunities for growth that he wouldn’t otherwise have,” said Marcie, Cole’s mother. “Like shooting bow and arrows at Cary Camp, Boy Scouts gives him the opportunity to do ‘boy things’ in a safe environment. He is learning so much about safety and leadership.” She explained that she is thankful for the derby race today at Faith Community Center, because it “gets families together in ways other than watching TV.”

After their car competed on the race track, many of the boys ran back eagerly to their dads, most of whom helped their sons build their cars. This was clearly a family-oriented environment.

The winner of the Cub Scout Pinewood Derby Race of 3396 was Nick Bush. Nick will go on to compete at the district competition. Faith Community Center wishes Nick the best of luck at the district race. 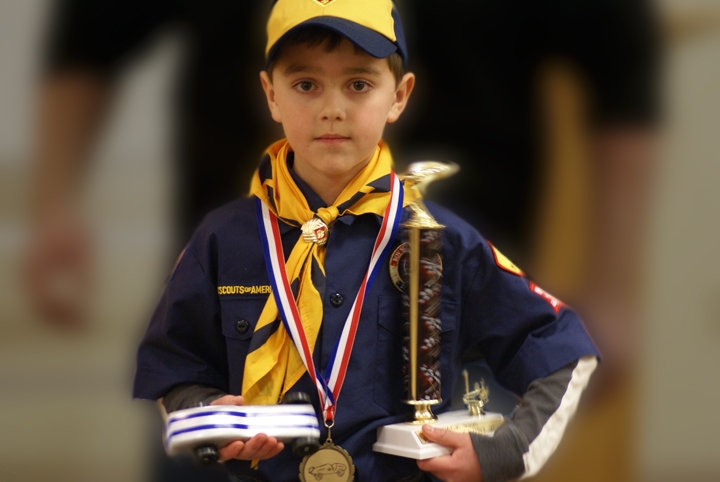 Photos from the event can be found on the Faith Community Ministries Facebook Page.

Alexandra Nitzschke<@fcmlafayette
Alexandra is a passionate individual who maintains a devoted delight for the creative realm but finds her deepest pleasure in the gospel of Jesus. She is a lover of stories, and has a weakness for dry wit and a good cup of coffee. Alexandra is a Vision of Hope graduate (2011) and the wife of Stefan Nitzschke, a pastoral intern and student of Faith Bible Seminary.