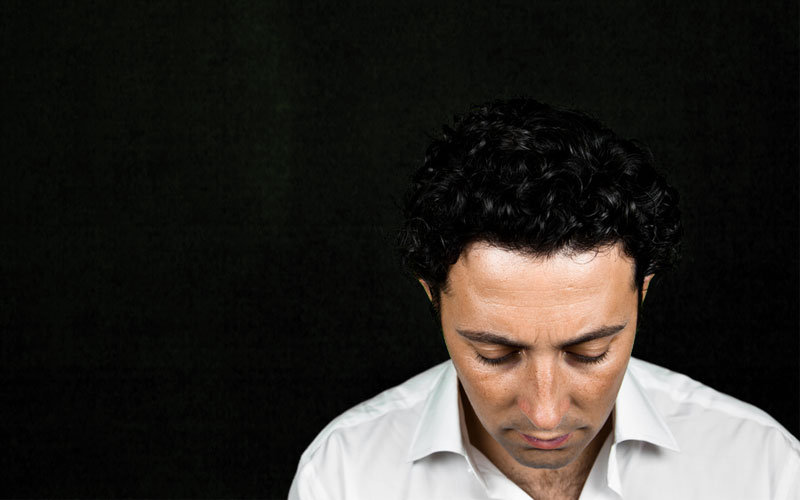 You just trash-talked your fellow employee yesterday about how your football team was going to annihilate his.  Today, the score on ESPN and the sports page of the paper says otherwise.  You contemplate skipping work. . . .but instead, while on your way to work, you quickly develop the top five reasons for his team’s victory (reasons that would avoid the topic of your team being defeated or having to admit that his team played well).  What would you try hard to avoid saying?  _ ___ ______ .

Or (ladies), you had a discussion with your girlfriends about the awesome half-off sale at your favorite store.  You told all of them a week ago that it was this Saturday.  Well, everyone showed up, but no sale.  You are ready to write the president of the store a letter telling him how his advertising department failed . . . until one of your friends reads a sign that says “half-off sale” with the listed dates starting next Saturday.  What is the hardest thing to say at that moment? _ ___ _______.

Tactics we use to avoid admitting, “I was wrong”

So if you’re in to fill in the blanks, than you’ve probably guessed what three words can easily follow up these scenarios (and so many other similar situations).  “I WAS WRONG.”  It hurts just to read it, doesn’t it?  Some of you have probably already said to yourself, “Ha, that’s your problem” or, “I’m totally good with that guy saying those words, but those are not my words.”

Not only do we not want to say these words, we typically revert to “garden defensive tactics”, so to speak, to avoid having to admit personal wrong.  Two main tactics exist in every person’s built-in sinful pursuit of protecting self (Genesis 3) when in a state of guilt:

Generally speaking, the older we are, the more creative and skilled we become at manipulating both the data revealing our wrongdoing, and our response to being guilty.

Generally speaking, the older we are, the more creative and skilled we become at manipulating both the data revealing our wrongdoing, and our response to being guilty.  We tend to deceive ourselves and try to deceive others into thinking we are actually “not that bad” or “not capable of doing something like that”.  Or worse yet, we even begin to argue that the wrong done was really ok because of the so called good that came out of it.  Frankly, if God handed out PhD’s on hiding and blame-shifting, I think all human beings would have that degree, and it would not be an honorary one, but earned.  To go a step farther, some may be pursuing a second PhD.

Let’s face it, being wrong about which football team will win or when a sale takes place are minor compared to issues like admitting your wrong to your spouse when you raised your voice, or saying you were wrong when you reacted in sinful anger to your child’s disobedience, or admitting your wrong to an employer when you lied about your numbers so they’d look good on the sales report.  There are a thousand other examples.  We won’t even get started on the individuals in the public eye of business, sports, politics, or religion who have played the hide and blame-shift game; these certainly have a heavy impact because of their large public influence, but the problem itself is still the same…why do we have such a hard time admitting we are wrong?

Reasons we have trouble admitting that we’re wrong

Here are a few reasons we need to consider in this discussion:

The greatest request ever

But, the good news…because of one perfect man’s sacrifice, the hardest words to say become some of the wisest and most valuable words to say – and they are followed by the greatest request ever . . .

Because of Jesus, every wrong has been paid for – with His blood.

Because of Jesus, every wrong can be made right.

Because of Jesus, you can be forgiven.

Because of Jesus, there is strength to stop doing the same wrong.

Because of Jesus, grace abounds over sin/wrongdoing.

Because of Jesus’ sacrifice, peace can be experienced after wrongdoing.

Because of Jesus, our weakness can reveal His strength.

Because of Jesus, our response to sin can be used to bring Him glory.

And what is the greatest request to follow the words “I was wrong”?

“Will you forgive me?”

When this question is asked, Jesus, along with all His resources, just got invited to the table.

Use God’s Word as your standard

Using God’s word as our standard, we don’t have to look hard or long to see that there are plenty of opportunities to admit our wrong and seek God’s forgiveness, and the forgiveness of those we offend (Psalm 51; I John 1:9).

I recently had a rough, but needed, two days of back-to-back situations of going to family members and others saying, “I was wrong; will you please forgive me for ___________”.   You know, even in the preparation for those discussions with family members, I was tempted to sinfully find a way to justify and blame my wrong/sin on the other family member.  (Yeah, I know, wicked wrong).  God graciously brought that to my attention (without the 2×4 – thankfully).

What did I do in my situations?  Well, by God’s grace, I did the hard thing and talked to my family members.   I admitted that my behavior was wrong and I asked for forgiveness.  Hard?  Yes.  But the right thing to do?  Absolutely!

As a Christ-follower, these words may be hard, but they also should be said often.  God is opposed to the proud, but He gives grace to the humble (James 4:6b).  May God help us to humbly admit our wrongs, seek forgiveness, and then take steps to grow and change for His glory.

A few other passages to help on this topic are Romans 5, Ephesians 1-3, and Colossians 1-2.

If you have not personally admitted your sin to God and placed your faith in Christ alone for your salvation, I invite you to visit the post What is the G.O.S.P.E.L.?

Andy Woodall
Andy Woodall served as the Pastor of Student Ministries at Faith from 1999-2012.