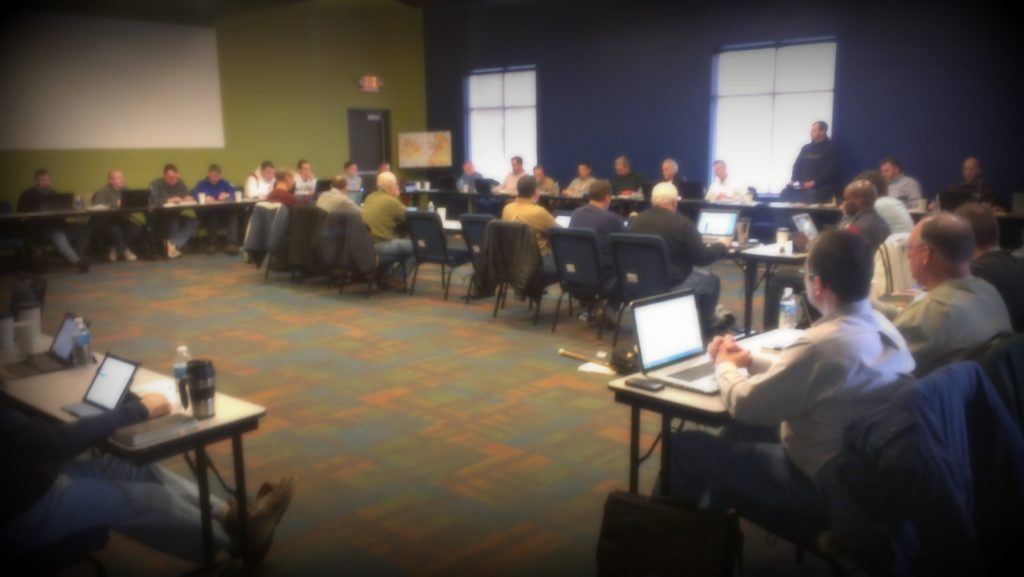 That was the prayer of Kevitt Brown to start our deacon’s retreat today.  What a profound statement! Or rather, what an entirely appropriate recitation of Scripture given the setting we were all in.  Around the room sat 50+ men assembled from all walks of life: lawyers, engineers, pastors, blue-collar working men, seminary students and more.  These men and their families are committed in service to the Lord of Heaven and Earth at our church … Yet, they weren’t always that way…

Allow me to explain…

Throughout the day, Pastor Viars continued to press upon us the significance of our response to all that God had entrusted to us.  He emphasized that what God was allowing us to be a part of at Faith Church is no small thing.  We are instruments in the Redeemer’s hands.

And who are were we?

We are rebels against the Most High, going about life our own way, doing whatever seems right in our own eyes… or at least, we once were.  No more!  For, by God’s grace, this group of men has been redeemed.  Our eyes have been opened to our wretched status before a holy God, and we have availed ourselves of the redemption available through his Son.  It is not by our own might or works, but by His grace we are now reborn in Christ. It is through the sanctifying work of the Holy Spirit that we gathered together for a common cause: to faithfully steward all that God has entrusted to Faith Church.  We came together to plan, to dream, and to take steps of action that would lead to God being glorified as we seek to win people to Jesus Christ and equip them to be more faithful disciples.

A moment of transparency

I will be honest.  I did not grasp the weightiness of the day.  I did not see the significance of our gathering.  Shame on me.  In the very same room, where we gathered this morning, I had just taught the night before from Romans 8 about the appropriate response to our great God.  In Romans 8, we learn that we are redeemed, made righteous, no longer condemned, set free from death, adopted as sons, coheirs with Christ, and so much more.  I taught that our response to such a gracious and merciful God must be a heart overflowing with thanksgiving and praise which expresses itself in a desire to be pleasing to God.  This is the only appropriate response to such a great God; the one who is “greatly to be praised.”  Yet, here I was, less than 24 hours later, not even seeing it.

By God’s grace, when I got home and sat down to pray, the Holy Spirit prompted my heart.  I began to thank God for all that He had done.  I began to replay the conversations we had during the retreat, remembering just how much God has done, and how much of His character has been revealed to us along the way.  I began to praise His name.  This blog is an attempt to praise His name.  I’m writing this as I reflect.  The words pour forth from my fingers as I am overwhelmed by the amazing grace of God.  As I think about my own journey at Faith, I realize how much it has been influenced by men who have and continue to be used by God: pastors like Pastors Aucoin, Folden, Green, and Viars and laymen like Joe Blake, Kevitt Brown, Doc Smith, Will Johnson, Jerry Jamison, etc…  These men, along with the rest of our pastoral staff and deacon team, are godly men who are faithfully following the Lord and making disciples along the way.  But, they weren’t always that way…

You see, someone else also invested in them.  I don’t know those men and women personally, but I know some of their names: Pastor Goode and his wife, professors at BBC, Westminster, Bob Jones, and many other vocational and laypeople along the way.  All of these men were at some point poured into by other faithful followers of Jesus.  That is remarkable!  But it is not remarkable because of the people, rather because of the God behind each of them.  The God who, for generations past and generations to come, is in the process of redeeming sinful men and women and refining them to be conformed to the image of His Son. This God is making beautiful things out of dust, as the song says.   THAT is worth praising and rejoicing in!  Great is our God and greatly to be praised!  He has been at work for generations, and I am now allowed, privileged even, to be in this place of abundance as a result of the rescued, redeemed, sanctified, and faithful men and women who have gone before me.

So yes, God is great, and He is greatly to be praised.  Shame on me if I’m not among the first to the foot of His throne to offer those praises to Him every day.  There is no question that I, and the rest of Faith Church, delight in the Lord’s abundance because of all that has happened before us.  Now I (we) have the privilege and the responsibility, humanely speaking, to carry the torch.  We have been given much and we will be held accountable for much.  Pastor Viars pointed out that, for some reason, God has allowed us to be a 10-talent church.  It’s time to get busy stewarding my part of those 10-talents… in a position of humility and praise.

His right hand and his holy arm have worked salvation for him.

Nick Lees
Pastor Nick Lees and his wife, Micaela, have been a part of our staff since Fall 2010. Nick oversees the College, Wedding and Faith Church West Children’s Ministries, as well as Faith West Ministry Housing. Nick is also an ACBC certified counselor. He and Micaela have four daughters, Anniston, Eden, Haddyn and one still in the “oven”.