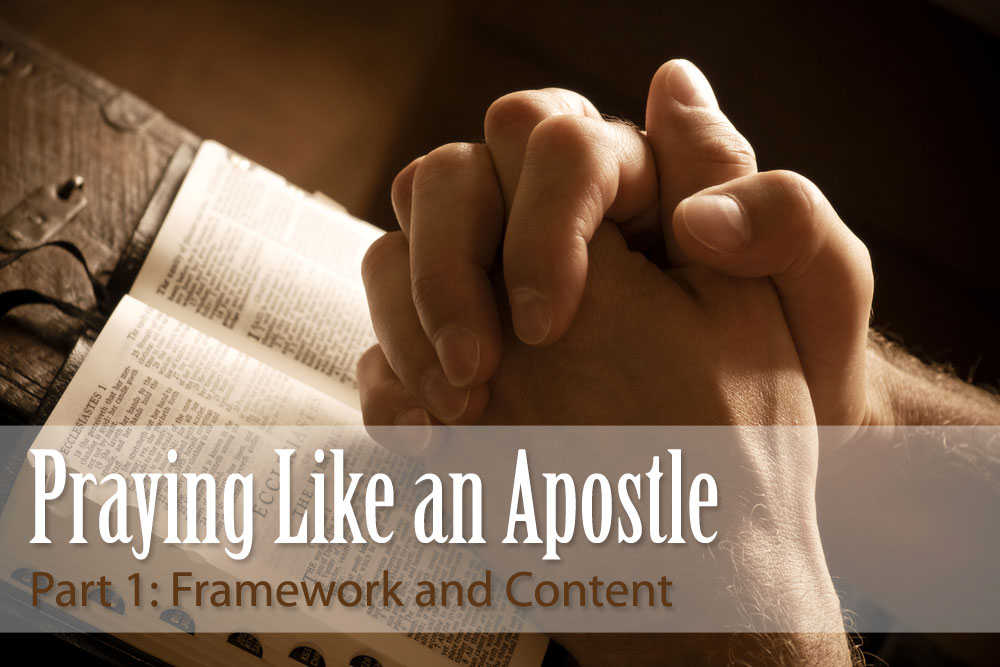 Have you ever struggled praying, whether it be the disipline of setting aside time to pray, or knowing how to pray?

If you gather a bunch of Christians together and ask them what part of their walk with God they think they need to grow in, inevitably many of the answers revolve around prayer. We simply tend to struggle with it. Studying the apostle Paul’s prayers can help. How did Paul pray, what led him to prayer, what burdened his heart that brought him to his knees before God…and how can we align our habits with his?

I recently started teaching a Faith Community Institute (FCI) class entitled Praying Like an Apostle. I’m using D. A. Carson’s book, A Call to Spiritual Reformation, A: Priorities from Paul and his Prayers. So often we read right through the beginning part of Paul’s letters, but Carson really unpacks the prayers in a helpful way.

In reading this book I realized two things: First, Paul understands the big picture of God’s redemptive plan, and his prayers reflect that in a way that is personal and driven by a passion for people. Secondly, I learned that my prayer life doesn’t look like Paul’s, and that I need to study how he prayed with a willingness to change.

Looking at 2 Thessalonians 1:3-12 is one of the first steps to seeing the framework and content of Paul’s prayers. This is not a magic formula, but rather a helpful exercise to help us take a step toward developing a deeper prayer life.

God’s grace is on display, and we need to develop the mental framework to look for signs of grace in the lives of Christians, and give God thanks for them.

By framework, I mean the surrounding issues and motivation that leads to the prayer. In other words, what is Paul observing and valuing that provides the structure and motivation for his prayer?

There are two important pieces to Paul’s framework that we need to understand if we are to take steps of growth. The first is Paul’s thankfulness for signs of grace, and the second is  Paul’s confidence in God’s Justice.

3 We ought always to thank God for you, brothers and sisters, and rightly so, because your faith is growing more and more, and the love all of you have for one another is increasing. 4 Therefore, among God’s churches we boast about your perseverance and faith in all the persecutions and trials you are enduring. (2 Thess. 1:3-4)

What is the explanation for this? The answer is grace. They have been given grace, the unmerited gift of eternal life through Jesus Christ’s sacrifice on the cross. That is what is motivating them to grow in faith, love, and perseverance. Paul sees that overflowing and he is moved to thank God as the one who is orchestrating that kind of interaction between his people.

God’s grace is on display, and we need to develop the mental framework to look for signs of grace in the lives of Christians, and give God thanks for them.

The second piece is Paul’s confidence in God’s justice.

5 All this is evidence that God’s judgment is right, and as a result you will be counted worthy of the kingdom of God, for which you are suffering. 6 God is just: He will pay back trouble to those who trouble you 7 and give relief to you who are troubled, and to us as well. This will happen when the Lord Jesus is revealed from heaven in blazing fire with his powerful angels. 8 He will punish those who do not know God and do not obey the gospel of our Lord Jesus. 9 They will be punished with everlasting destruction and shut out from the presence of the Lord and from the glory of his might 10 on the day he comes to be glorified in his holy people and to be marveled at among all those who have believed. This includes you, because you believed our testimony to you. (2 Thess. 1:5-10)

Paul can go to prayer–and not simply to sorrowful reflection–because Jesus is coming back. Ultimately God is the one who is going to vindicate those who have trusted him, and levy justice upon those who have afflicted his people.

So rather than Paul spending his time mulling over how he can exact revenge, or increase protection, or just vent frustration for the circumstances, he can pray knowing that God is just, and that he is returning to “be glorified in his holy people.” This doesn’t mean that somehow the Thessalonians have earned their way into God’s kingdom, but rather that their suffering demonstrated their trust of God. The Thessalonians have believed the good news, and because God is just we can pray to him with confidence and focus on his overall plan.

Now we move into Paul’s actual prayer. He leads off with the phrase, “with this in mind”. “This” is referencing the framework, the fact that there are signs of God’s grace to be thankful for, and that God is just and ultimately returning. This is what leads Paul into his prayer.

11 With this in mind, we constantly pray for you, that our God may make you worthy of his calling, and that by his power he may bring to fruition your every desire for goodness and your every deed prompted by faith.

Paul prays that God would make the Thessalonians worthy of their calling, and that God’s power might bring them along in that process.

Paul is not just telling the Thessalonians to try harder, or be stronger…he prays that it would be God’s power that helps them grow and become worthy of what God has already given them. The calling is so high they can’t do it by themselves, and Paul’s prayer encompasses the high calling to grow, but also for God’s power to be the fuel that enables that growth.

The Goal & Grounds for Paul’s prayer

Paul’s prayer is for them to be considered worthy , but that is not the highest goal; rather, it is what is necessary to accomplish the goal of God being glorified.

12 We pray this so that the name of our Lord Jesus may be glorified in you, and you in him, according to the grace of our God and the Lord Jesus Christ.

The ultimate goal is that Jesus may be glorified. God is glorified when believers grow in maturity and fruitfulness. When there is real change that can only be explained by the person and work of Jesus Christ, God’s glory is revealed. We are representing Him accurately.

As we pursue this goal of glorifying Jesus, we are also to be glorified in him. When we are changed and become more like Christ, we as God’s representatives are glorified to the degree that we are image bearers that ultimately are to reflect the glory of God.

Lastly, this is all “according to the grace of God.” Just so the Thessalonians didn’t lose focus at the end of the prayer, Paul reminds them that none of this is possible without God’s grace. God’s grace is the grounds for this whole prayer. If God does not by His grace save us and sanctify us, none of this has any hope of success. Ultimately that means all the glory is due our great God and Savior.

I pray that this exercise walks encourages you to look for signs of God’s grace among his people, and to look forward to his return. I hope it also motivates you to pray that God would help you grow to be considered worthy of the high calling that Jesus shed his blood to bring about.

Dustin Folden
Pastor Dustin Folden and his wife Trisha joined the Pastoral Staff in 2010. They have two children, Sawyer and Mackenna who absolutely love children’s ministries, mostly because of the singing and snacks. Pastor Folden shepherds the 9:30 worship service, oversees the Adult Bible Fellowship ministry, as well as serves in the Biblical Counseling Ministries.