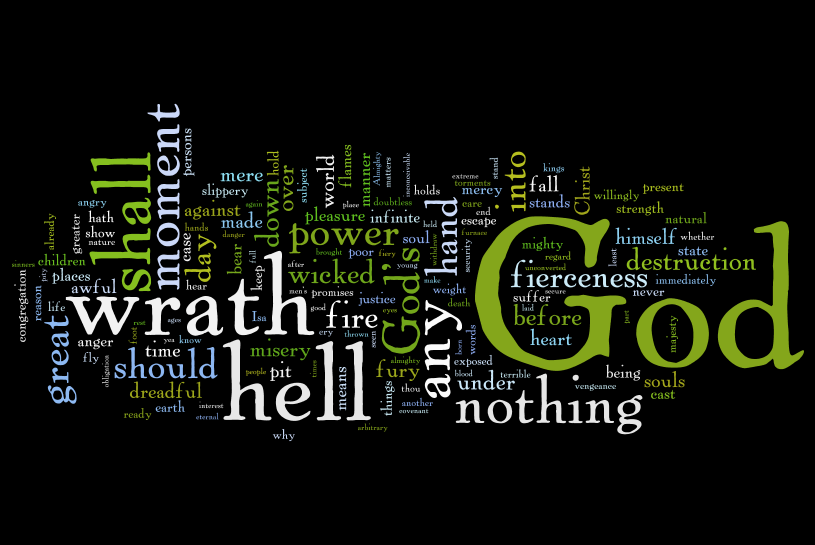 “Not everyone who says to Me, ‘Lord, Lord,’ will enter the kingdom of heaven, but he who does the will of My Father who is in heaven will enter. “Many will say to Me on that day, ‘Lord, Lord, did we not prophesy in Your name, and in Your name cast out demons, and in Your name perform many miracles?’ “And then I will declare to them, ‘I never knew you; DEPART FROM ME, YOU WHO PRACTICE LAWLESSNESS.’  (Matthew 7:21-23)

Swinging over the pit of eternal damnation; dangling from a thread the breadth of a spider’s web; bouncing and provoking, from this thread, the flames below and the hand of God above, resides the unrepentant sinner.  His life-line is well-charred and his conscience is well-seared and he is foolishly unaware of his precarious position.  The frailty of his consistence is ill-known to him.  His residence here, not more than a spark from eternity, is God’s allowance – God’s mercy in providing for repentance.

The text of Matthew 7:21-23 is a frightening one, to be sure.  It is a passage that assures us of the eternal damnation of “many” self-proclaiming prophets and followers of Christ.  It is a difficult passage to fully grasp but, pulling it apart, we can gather much information that I truly hope can help us on our journey.  More importantly, though, I hope that we can use this text for the benefit of those in the same position as the lawless to whom Christ spoke.

Beginning with the first words of the condemned, “Lord, Lord”, we can begin to sketch something of their character.  “Lord, Lord”, carries the tone of a frightened plea; a rapidly accelerating heart-beat.  The context, in verse 19, discusses a bad tree that is cut down and thrown into the fire.  It may be that the condemned of whom Christ speaks are cut down in a manner similar to those mentioned in Luke as having been crushed by the tower in Siloam.  The condemned, it seems likely, are cut down unaware and unrepentant.  They’re surprised at the pace of the events that have led them to judgment.  Their plea, as death so quickly dawns on them, begins with a lie and ends with deception.  “Lord, Lord.”

Of Deception and Lawlessness

We can be sure that they had not appraised Christ as Lord in life by the predicament in which they found themselves in death.  No one who truly confesses Christ as Lord will ever be told “Depart from Me”.  Their appeal, then, to Christ’s lordship was a lie.  Furthermore, they continue with their deception by trying to convince Christ that they had been doing His work while they were living.  It’s almost as if they were saying “Lord, Lord, we were happily and innocently going about your work when this horrible thing happened, and now You’re rejecting us – what’s the deal?”

We can be sure that whatever the works that these condemned busied themselves with were not the works of the Father.  He who does the will of My Father who is in heaven will enter [heaven].  Though we can’t be sure what exactly these men were doing, we are told by Christ that they lived outside of the law.  They, themselves, tell us that they were performing miracles and casting out demons.  It is likely that they had been deceiving people in some manner or another for personal gain.  They carried this trait into death, then, and attempted the same with their Judge.  They hoped that Christ would fall for the “works” that they had deceived others with in life.

These men were swinging over the pit of eternal damnation; dangling from a thread the breadth of a spider’s web; bouncing and provoking, from this thread, the flames below and the hand of God above until, in a moment, they were cut down.  And what a surprise it was.

In life, these men must have looked like so many that we see around us today.  Contemporarily, they would probably have a large Bible on their coffee table; the spine of which remained unwrinkled.  They would attend church regularly and engage religious topics from a biblio-secular perspective.  This perspective might likely use as its platform its interest in the well-being of all men; its celebration of [sexual] diversity; its tunnel-visioned focus on its [perverse] understanding of Christ’s love, and the allure of its [faithless] questioning of several particular portions of scripture that a loving [holy] God wouldn’t permit.

Those of whom Christ spoke are plentiful.  They look like you and I.  They speak some Christianese.  They’re seen and respected by many because of their works or words, which appear quite holy.  They are our friends and family members; co-workers and fellow church-goers.  We probably believe that their walk is straight and true.  They may also believe this.  Christ, though, when the thread burns through, will cast them away as unknown criminals.  Let us consider this and concern ourselves with this and take Christ to our people, no matter our understanding of their walk.  Edification with our brothers and sisters will always be a fruitful endeavor.

A practice of transparency in our own lives and an openness in communication about such topics as hell, and those who fill it, may well be the instrument that Christ chooses to use to weave that thin thread into a tow rope for our loved ones.

Make life to be about pulling the rope for those who are weaker.  Make love to be about drawing them toward reconciliation with their God.  Make faith to be about stretching so far that no anchors remain but Christ.

Andrew King
Andrew and his wife, Jill, joined Faith in 2007. They are the owners of ChristopherGardens - a residential landscape company that seeks to provide employment and resources for the homeless and ex-offender populations. They are members of the Peacemakers ABF and Andrew serves as a Deacon.