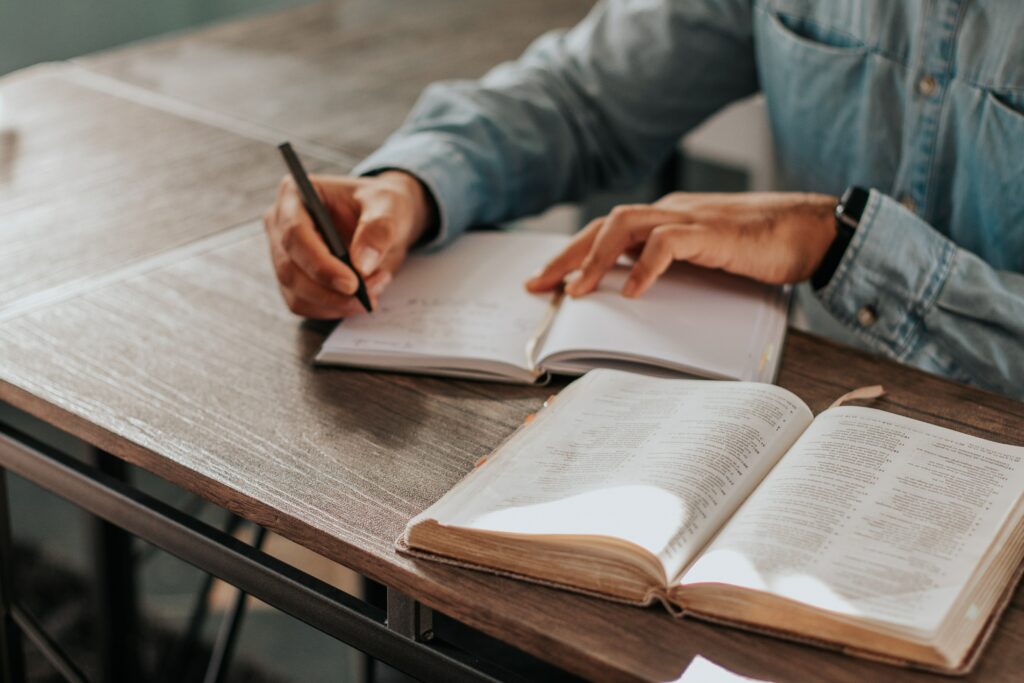 In the book of Exodus, we have also learned about the covenant God is entering into with the Israelites, how He has gathered them to Himself, and that He is going to dwell with His people. They have a lot of specific instruction how to construct a tabernacle and what goes in the tabernacle and there is a great amount of details of what to make.

However, the question is, now that they have this tabernacle, “How do they use it?” A bigger question is “How are they supposed to live in the presence of a Holy God dwelling in their camp?” These two questions go together. The book of Leviticus is going to explain how to use the tabernacle and how the sacrificial system and the priestly system is setup by God to address the people’s sinfulness so that God can dwell among the people, albeit in a way that foreshadows a greater intimacy and closeness that is to come. Also, this whole process and system requires the people to follow God by faith, trusting in the provision He is making for them to be in a right relationship with Him.

This whole book and system that God is setting up will allow them to be a kingdom of priests and a holy nation as this process when done by faith will allow them to be in a right relationship with God and also allow them to stand out among all the nations pointing them to the God who is holy and unlike any other. The people’s relationship with God, with each other, and also with other nations is all in play. God tells His people about their purpose after he rescued them.

Exodus 19:3–6 –3 Moses went up to God, and the Lord called to him from the mountain, saying, “Thus you shall say to the house of Jacob and tell the sons of Israel: 4 ‘You yourselves have seen what I did to the Egyptians, and how I bore you on eagles’ wings, and brought you to Myself. 5 ‘Now then, if you will indeed obey My voice and keep My covenant, then you shall be My own possession among all the peoples, for all the earth is Mine; 6 and you shall be to Me a kingdom of priests and a holy nation.’ These are the words that you shall speak to the sons of Israel.”

But first the people must make atonement for their sin…before focusing on any mission they must address the elephant of sin in the room and in the human heart. That is why the book kicks off with sacrifices.

Leviticus 1:4 –4 ‘He shall lay his hand on the head of the burnt offering, that it may be accepted for him to make atonement on his behalf.

An Israelite is to place their hand on the animal’s head that is going to die and make atonement because of their sin. Sin leads to death, and God has made a way for one life to be given to protect the life of another.

There are a lot of different sacrifices, five to be specific. They are the Burnt Offerings, Grain Offerings, Peace Offerings, Sin Offerings, and Guilt Offerings. Often the sacrifices are grouped together, but for now I just want to focus on two sacrifices, the brunt offering and the grain offering.

People could bring an animal from the Herd (Cattle), or the flock (Sheep/Goats), or a bird. This seems to make provision for people who may have different animals they raise but also the poor, which is really encouraging that everyone is to participate no matter what their economic status. It also points forward to how God desires the heart of sacrifice and brokenness and not just the sacrifice itself. This also seems to be a freewill offering that people choose to participate in as they want to be in relationship with God and they want to make these sacrifices not simply out of duty, but because of who their God is, the one who rescued and redeemed them from slavery.

The whole offering was burnt up. Other sacrifices have a portion that is eaten by the priests and/or the people making the offering, but not this one. It just seems fitting that the most common sacrifice, the first one listed and that is to happen every day is completely dedicated to the Lord. It reminds me that I need to be completely atoned for, body and soul and that ultimately the Lord deserve all of me.

The offering also is to be a young male without defect…in other words, it is in the prime of breeding and has the potential to increase the value of your flock…this sacrifice has value…it truly is a sacrifice because you see the Lord as more important than your flock increasing with this strong young animal breeding.

All of this is a soothing aroma to the Lord, now this is not simply because grilling smells great…but obedience honors the Lord and He is commanding the people to sacrifice and make atonement and their obedience is going up to heaven like smoke. There is such a focus on the vertical relationship the people are to have with their God. Their sacrifice is accepted by God and they can be assured they are in a right relationship with God. This is not a guess; the priest is helping them know they are doing this in the way God has directed and therefore by their faith in Him shown by doing things in the way He directs allows the people to know He will accept it.

This sacrifice is a payment, an appeasement of the wrath of God. The one giving the sacrifice is to understand they are a sinner and that mankind has rebelled against their creator and God’s Holy wrath needs to be addressed, appeased, atoned for and not ignored. There are more sacrifices that celebrate God’s goodness and provision, but this sacrifice really understands that first and foremost in order to come into God’s presence and be in a relationship with Him the wrath of God over all mankind must be first addressed.

Leviticus 2:1 –1 ‘Now when anyone presents a grain offering as an offering to the Lord, his offering shall be of fine flour, and he shall pour oil on it and put frankincense on it.

The grain offering was like the burnt offering in that it had to be of the highest quality. Fine flour, however it was grain and not an animal. This draws my mind back to Cain and Abel’s sacrifices of an animal and grain.

Grain was often used as tribute for a King who protected a smaller vassal nation (2 Sam 8:2,6, 2 Kings 17:3–6). The same word for tribute is used here for grain offering, but tribute can also be an animal offering.

Here we see the grain offering not being a payment for sin, but an act of worship and appreciation and honor. The people give gifts to indicate worship of their king. Note the frankincense that is mixed in and the royal undertones there. Also note the cost, the value…this is also a sacrifice of value. There again seems to be a provision for the poor to prepare the grain in various ways if they can’t afford frankincense and also it gives folks flexibility to prepare the grain in a number of ways so that they can take part in worshiping the Lord.

A portion is combined with oil and incense to create a distinct aroma and indicating this is again going up to the Lord…but not the whole sacrifice. The remainder were to be eaten by the priests (Aarons sons), presumably to provide for the priests and celebrate their role in this whole process. It seems you can have the flour be combined with oil and frankincense and offered in that form, or you can bring it already made having baked it, or make it on a griddle sort of like pancakes, or you can fry it in a pan, like donuts…this seems to be the process if you don’t have frankincense. However, there is to be no leaven or honey used for the memorial portion or the portion the priest eats (Lev 2:11). This points again to the holiness of God as over time yeast and honey will spoil. It also reminds the people of the haste at which they fled Egypt (Deu 16:3).

The priest eat the extra unleavened bread, I believe to indicate they are set apart to lead this process as leaven traditionally is left out to indicate the purity and holiness of God and the priests are the ones going between the people and God, sprinkling blood and drawing nearer to the Lord in the tabernacle. But as we will see later in Leviticus chapter 7 there is to be some more bread that is made with leaven that is to be eaten

There is also an option to bring early ripened grain, the first fruits of the harvest that have been roasted. This seems to again indicate a sacrifice where you give God your first and your best because you believe He is more important than everything and ultimately, He is the one who blesses, and gives life and allows the animals and grain to flourish and grow.

I believe this variety points to the fact that different people will be sacrificing at different times and preparing things a bit differently, and this takes away barriers and allows everyone to participate. But what brings them together is they are all worshipping God in the way He has provided for them.

They are also to add salt to their sacrifices (Lev 2:13)…It seems clear that all these sacrifices are to be given with a heart of thanksgiving as Lev 7 emphasizes…One of the things to be especially thankful for is the longevity of the covenantal promises of God and the efficacy of these sacrifices that are done in faith based on what God has promised. Salt may be a reminder that God’s covenantal promises are long lasting and secure. All these sacrifices are to be done because they are in a covenant with the God who rescued them. Num 18:19 and 2 Chr 13:5 seem to speak to salt indicating the long-lasting nature of the covenant.

All of this really helps me appreciate the depth of my calling as a new testament believer who has been reconciled to God because my sins have been atoned for by the blood of Christ. I have been freed to worship my king and give and sacrifice my life for His glory. It also helps me to think about myself as a priest in the kingdom of God and that has a great number of implications for our lives.

1 Peter 2:9–12 –9 But you are a chosen race, a royal priesthood, a holy nation, a people for God’s own possession, so that you may proclaim the excellencies of Him who has called you out of darkness into His marvelous light; 10 for you once were not a people, but now you are the people of God; you had not received mercy, but now you have received mercy. 11 Beloved, I urge you as aliens and strangers to abstain from fleshly lusts which wage war against the soul. 12 Keep your behavior excellent among the Gentiles, so that in the thing in which they slander you as evildoers, they may because of your good deeds, as they observe them, glorify God in the day of visitation.

Dustin Folden
Pastor Dustin Folden and his wife Trisha joined the Pastoral Staff in 2010. They have two children, Sawyer and Mackenna who absolutely love children’s ministries, mostly because of the singing and snacks. Pastor Folden shepherds the 9:30 worship service, oversees the Adult Bible Fellowship ministry, as well as serves in the Biblical Counseling Ministries.