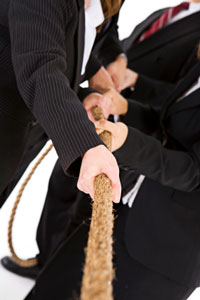 We live in a representative democracy.  The underlying premise is that free and fair elections will allow us to choose the wisest and most mature citizens to provide seasoned and productive political leadership.  That notion is being significantly tested today as a group of our elected officials have literally fled the state instead of facing the likelihood that bills they oppose would be debated and then moved forward in the legislative process.  Who’s at fault depends on your point of view.  The Democrats believe the Republicans are ramming bills down their throats without proper negotiation and compromise.  The Republicans insist that the Democrats should return to the statehouse and take the medicine that comes with losing the latest round of elections.  When and if the Democrats will ever go back to Indianapolis is anyone’s guess.  So much for civility and camaraderie in politics.  There are at least five lessons for God’s people during this unusual time.

Be reminded of the extent of the curse of sin.

Sin destroys and separates.  It leads to petty division and pointless rancor.  But we hardly have to go the the statehouse to be reminded of that truth.  Sin isn’t just something that politicians do (especially the ones from that other party–whatever that party is), it is something we all do.  This latest political fiasco should remind us of the extent of the curse of sin in our own hearts.

Pray for our elected officials.

Paul told Timothy, “First of all, then, I urge that entreaties and prayers, petitions and thanksgivings, be made on behalf of all men,
for kings and all who are in authority, so that we may lead a tranquil and quiet life in all godliness and dignity” (1 Timothy 2:1-2).  I’ll be the first to stand in the line of people who do not obey this command as faithfully as I should.  Would anyone like to stand in line with me?  Perhaps we should pray more and criticize less.

Be thankful for the Prince of Peace.

The abundance of sin is not the end of the story.  “Where sin increased, grace abounded all the more” (Romans 5:20).  God sent His Son, predicted by the prophet Isaiah to be the Prince of Peace (Isaiah 9:6), to die a cruel death so that humans could be freed from the power of sin and death.  Men and women fighting in a sin-cursed world really should not surprise us.  What should amaze us is that God has made a way for people to learn to communicate and solve their problems in a Christ-centered fashion.  The depths of the fights should cause us to marvel at the sufficiency of God’s grace.

Celebrate the unity we enjoy in our church.

Paul spent the first three chapters of the book of Ephesians explaining the great resources we have in the finished work of Jesus.  This understanding of our identity in Christ, also called the gospel indicatives, is the foundation of our relationships in the church family.  That is why the very next subject in the book is unity — “Therefore I, the prisoner of the Lord, implore you to walk in a manner worthy of the calling with which you have been called, with all humility and gentleness, with patience, showing tolerance for one another in love, being diligent to preserve the unity of the Spirit in the bond of peace” (Ephesians 4:1-3).  Relationships may be in turmoil down in Indianapolis, but always remember; Sunday is coming.  We should always be thankful for the unity we enjoy in Christ as a church.

Long for a better day.

The day is coming when Jesus Christ will establish His kingdom on this earth.  When that happens, the lion will lay down with the lamb.  That’s the OT equivalent of, the Republicans will lay down with the Democrats.  The sadness of human division is another reason to await the return of Christ with joyful anticipation.  This world desperately needs the Prince of Peace.