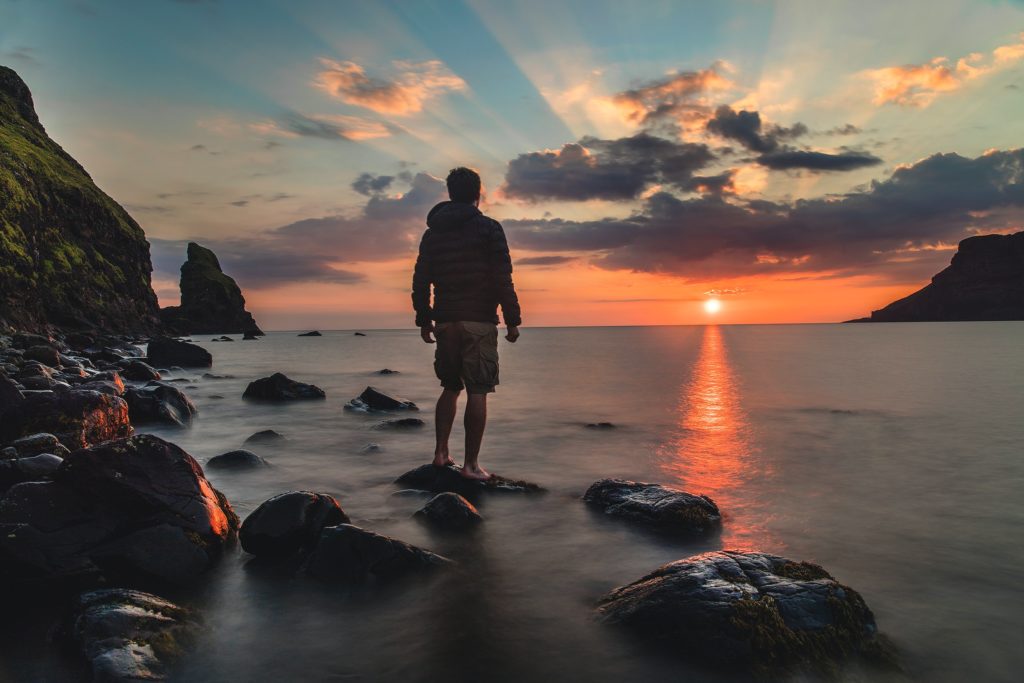 This is one of the most famous movie quotes of the 1980s. Clint Eastwood said it in the movie Sudden Impact (I don’t think I ever saw the movie, but I was a child of the 80s). I would like to use this quote as a metaphor for how we should and should not respond to our heavenly Father.

The Negative First – Never act Arrogantly Toward the Lord

The Bible reminds us not to put the Lord to the test. In Matthew 4:7 and Luke 4:12 Satan encourages Jesus to jump off the pinnacle of the temple because His angels would rescue Him. It sounded simple enough. Jump to your death, but then ask the angels to rescue you. No big deal, right? Jesus responds with, “It is written, ‘You shall not put the Lord your God to the test.’” This is a quotation of Deuteronomy 6:16. When you read Deuteronomy 6:16 you realize that this passage reminds the people of earlier events. Moses commands the people not to test the Lord like they did earlier in their wilderness wandering. Exodus 17:7 describes the scene. The nation of Israel is newly freed from Egypt and watched the destruction of Pharaoh’s army and now they are complaining against the Lord.

This entire sequence from Exodus 17:7 to Deuteronomy 6:16 to Matthew 4:7/Luke 4:12 shows that we should never try to manipulate or force God’s hand. Just because God can do something does not mean that we should attempt to force Him to do it.

Peter also used this same “testing” terminology when he confronted Sapphira. You may remember the story. Ananias (her husband) and Sapphira owned a piece of property. They sold it in order to share with other believers. This was a challenging time for the believers as some were persecuted and exceedingly poor. It sounds like Ananias and Sapphira are doing a very noble thing. However, in the process of giving their gift, they tried to make a big deal out of it. They said they were giving the entire value of the land! In reality, they secretly planned together to withhold a portion. The problem was not the sharing or withholding, for they had the opportunity to do either. The issue is that they lied. They wanted people to believe that they were doing something they were not doing (Acts 5:1-11). Peter says that she was putting the Spirit of God to the test (v. 9). Why? Because they were disobedient to the Word of the Lord. The issue was not their generosity, but their willingness to lie about it. As you remember the story, both Ananias and Sapphira died. If Jesus did not convince us of the danger, then certainly this story would!

As we keep reading the Bible, Paul challenged the church at Corinth to learn from the wilderness generation and not be like them. He instructed them (and us!) not to put the Lord to the test (1 Corinthians 10:9). His reference in v. 9 recounts the time in Numbers 21 where the people complained about the manna God provided. Serpents came and many died. Paul describes that event as putting God to the test. They were dissatisfied with the provision that God gave them.

The theme seems clear – do not put the Lord to the test. Do not try to manipulate or force His hand. Do not willfully disobey God and then dare Him to do something about it. Do not live in a state of grumbling because the Lord has not given you what He has given to others. These are actions that put God to the test. In fact, sometimes it is helpful to remind ourselves that the Bible explains that God is the tester of human hearts (Proverbs 17:3 is only one example of many). Even if God allows hardship for the express purpose of testing what is in our hearts – that does not give us the right to put God to the test.

There is never a time that we turn to the Lord through our words or our actions and say, “Go ahead, Lord, make my day.” We are His bond servants through the wonderful sacrifice of Jesus on the cross. That was true when our jobs were going well, when our retirement accounts were growing, and when we were living in times of blessing. It is also true when times are difficult and when our old way of life seems threatened.

I have mentioned two truths so far.

But there is one passage that is very different.

Malachi 3:8 “Will a man rob God? Yet you are robbing Me!” You ask: “How do we rob You?” “By not making the payments of the tenth and the contributions. 9 You are suffering under a curse, yet you—the whole nation—are still robbing Me. 10 Bring the full tenth into the storehouse so that there may be food in My house. Test Me in this way,” says the LORD of Hosts. “See if I will not open the floodgates of heaven and pour out a blessing for you without measure. 11 I will rebuke the devourer for you, so that it will not ruin the produce of your land and your vine in your field will not fail to produce fruit,” says the LORD of Hosts. 12 “Then all the nations will consider you fortunate, for you will be a delightful land,” says the LORD of Hosts.

Here is an instance where the Lord invited the nation of Israel to put God’s willingness to fulfill His commands to the test. He was not undoing any of the theology we learned earlier. The Lord was reminding His people that He is always faithful to His promises and commitments. He invites us to obey and then watch what happens. In their case, the Lord says that He controls the “devourer.” This is the main threat to an agricultural society. The Lord knows how to care for His people even if it means turning a threat that results in calamity in another direction.

This passage is specifically about the Israelites’ requirements to give under the old covenant. I would like to broaden the application for us. Let’s think about the commandments of the Lord.

We never look at God and tell Him to make our day. We do not manipulate Him, or coerce Him, or demand from Him. But we do follow Him. We do seek, by His power working in us, to live for Him every minute of every day. Then we watch Him fulfill the commitments that He has made. It is not a sneaky form of manipulation. It is based on a heart that loves the Lord, wants to live for Him, and wants to watch God keeping every promise in living color.

Malachi 3:8-12 reminds us that sometimes God says something like this to us:

Go ahead – rejoice in your relationship with Jesus, demonstrate your love for the Lord by keeping His commandments, live with the commitment and passion to lift up the name of Jesus so all give glory to His name – and you will make my day.

Photo by Joshua Earle on Unsplash