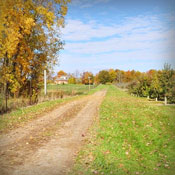 When I was in Bible College, my first ministry opportunity was serving at a rural extension Sunday School in NE Pennsylvania called Island Plains.  The location made middle of nowhere seem urban.  I can still picture the route—cross the river, take the first gravel road and keep driving a really long time.  We met in a run-down 2 room clapboard building that had definitely seen better days.

When we first arrived, there were 3-4 faithful families who had been praying that the Lord would send them workers to help stabilize the ministry and perhaps help it to grow.  In their minds, we were the answer to that prayer.  I decided to try the only thing I knew—so I started driving my car up to the area on Saturday mornings and going door to door and inviting the neighbors along the road to church.

On one of the first mornings, I knocked loudly at a farmhouse but received no answer.  As I turned to leave a woman rounded the corner of the porch with an axe in one hand and blood all over her apron.  I later learned that she had been out back slaughtering some kind of animal.  For a moment I thought I was in a very strange horror movie—“Slaying of the Squeaky-Clean Bible College Student.”

It was in that setting that I met a young girl named Tess.  She lived with her parents and sisters in a house that was as dilapidated as I had ever seen.  When I knocked, the family eagerly welcomed me inside.  It was fairly obvious they did not receive many visitors.  There were many things about the home that stood out, but the biggest surprise to me was seeing that they had a dirt floor.  I had no idea anyone lived that way anymore.  However, they were very kind people, and while the parents had no interest in attending church, mom and dad were more than willing to let their daughters go.  Tess and her sisters were thrilled that college students had driven that far to invite them and they readily accepted our offer.

I can still see Tess’s smile as she and her sisters would come each Sunday.  They loved the family atmosphere, the new songs, and especially learning from the Word of God.  Eventually Tess placed her faith and trust in Jesus Christ.  She was transferred from simply being a member of a poverty stricken family on earth to joining the family of the most-high God in heaven.  The lesson I learned that fall was that if you do a little work, you can usually find a Tess—someone in need of a cup of cold water in Jesus’ name.

Today the buildings are bigger and the problems more complex.  In fact this week I had several administrative issues blow up rather severely.  But in the midst of that, the Lord gave me a marvelous opportunity to share Christ with a young woman who has made quite a mess of things.  I’m praying that soon she will report that she too has become a child of the king.

I thought a lot about that this week.  Maybe things aren’t that different than my days at Island Plains.  Maybe it’s as simple as finding the next Tess.

So today I’m going to be less concerned with budgets, buildings, and the endless paper-pushing and administration that goes with a church like ours.  And I’m going to be more focused on, thankful for, and excited about…finding the next Tess.