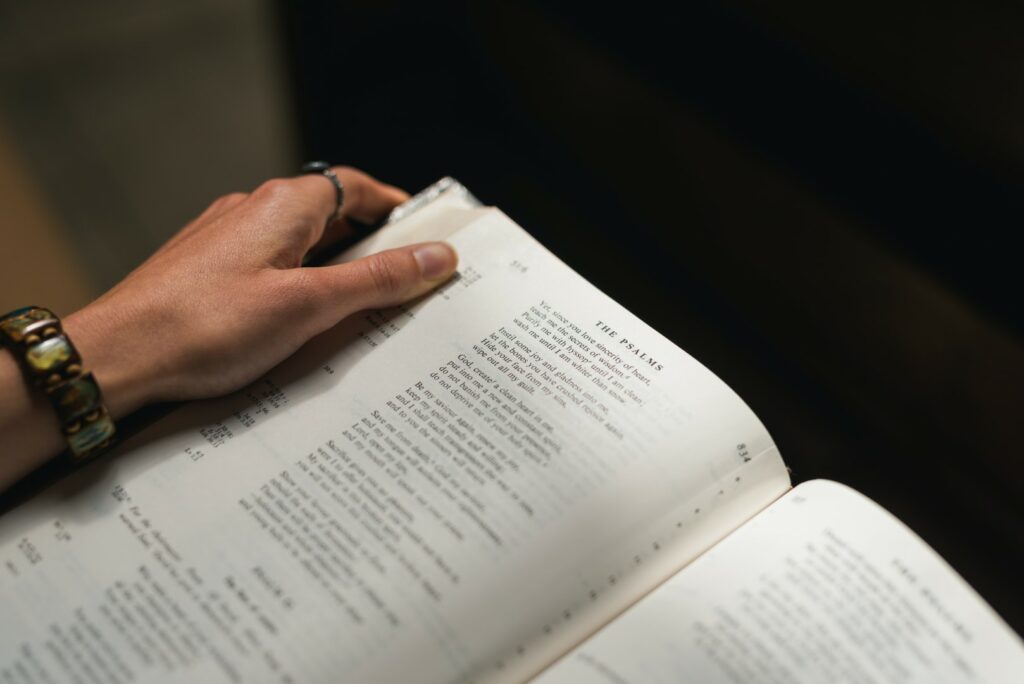 The Book of Psalms are a refuge in dark times. The comfort, the direction, the hope that each psalm provides can be a balm to the soul. But the psalms are more than just comfort in hard times.  They reveal the nature of God, tell us about creation, and even contain direction for when we have sinned.

That brings us to the question that we are going to consider, could you agree with David when he prays this prayer in Psalm 141:5:

“Let the righteous smite me in kindness and reprove me; It is oil upon the head; Do not let my head refuse it, For still my prayer is against their wicked deeds.”

Just pause and let that idea sink into your mind. It is clear David knows that, even as he prays for something, he will naturally recoil from it, and so he has to instruct his mind to not refuse it.

Those are hard words indeed. Surely the point of the passage is that David has sinned and he needs a loving rebuke. But his choice of words—smite—should catch our attention. It should grab you by the ears! It should get your blood moving a bit.

This is not a petition for someone to make a truth sandwich and be walking on eggshells as they talk to you. This is a cry for truth to prevail no matter the pain.

We don’t know the context of this psalm like we do some others. Sometimes the first verse of the psalm tells us the context (as in Psalm 51 when Nathan the prophet came to him). That context provides us a lot of information about that particular psalm that we just don’t get in the one we are considering.

So, why would David say such words? I want to offer three reasons why David could say what he did, and I would like to use the writing of his son Solomon to highlight them since Solomon seems to have caught this principle for a godly life when he penned his contribution to scripture.

Wounds from a Friend Can Be Trusted

In one place he says, “Faithful are the wounds of a friend, But deceitful are the kisses of an enemy” (Proverbs 27:6).

Often when there is a situation that involves confrontation, there will be wounds. Just as when a doctor causes damage to the body when he digs out cancer, so a friend causes damage when he roots out spiritual cancer. But these wounds can be trusted. This particular word for “faithful” is regularly translated “believed’ or “trusted” and can be found throughout the Old Testament.

This is unlike the flatterer. Our world is full of men and women who refuse to speak to one another about what God’s word would say about their life and the choices that they are making. Rather, they will keep quiet, “wait patiently for the right moment”, or even act as if they have no idea that something is wrong.

So often, however, when a friend wounds us, we run. We leave. We quit. We don’t see the value, as David does, of having a friend to smite and rebuke.

It is Better to Listen

David’s son picks up this theme again, although under the name of “The Teacher” and at what many believe, a later part of his life when he pens,

“It is better to listen to the rebuke of a wise man Than for one to listen to the song of fools. For as the crackling of thorn bushes under a pot, So is the laughter of the fool; And this too is futility” (Ecclesiastes 7:5–6).

Again, not many of us in our flesh would agree with this. Can we say that we would rather be rebuked than listen to a “song”? I realize that the text may not actually mean a song, but the author is painting a picture for us.

Qohelet (the Teacher as he identifies in Ecclesiastes 1:1) is highlighting the uselessness of these twigs. Think of kindling for heating a pot of water. It will not do. You need real logs to boil water, thus his conclusion that boiling water in this manner and listening to fools over a rebuke is futility.

But how often would we rather seek the pleasures of this world than listen to the wise words of a rebuke about how we are living, thinking, or even the things we value?

If the first proverb mentioned above warns us from hitting eject on a relationship, this one warns us of seeking pleasure and what feels right.

Lastly, as we consider why David would value such words (and actions from a friend). Let us consider,

“Like an earring of gold and an ornament of fine gold Is a wise reprover to a listening ear” (Proverbs 25:12).

So much of these pictures is easy to imbibe. Consider the beauty that comes from a fine golden earring (especially in a day and age where wealth was incredibly uncommon—gold was not what most people would have in their homes let alone on their ears).

Listening to a wise reproof would be like a badge of honor. And in this case, listening means following through with what was said. Doing so would set you apart. It would make you shine. It would show others something about you.

That is the effect that listening to a reproof can have on you.

Can You Agree with David?

So then, can you agree with David? Do you desire to be reproved when wrong?

“Let the righteous smite me in kindness and reprove me; It is oil upon the head; Do not let my head refuse it, For still my prayer is against their wicked deeds” (Psalm 141:5).

Most major translations translate the word “hesed” as kindness. That English word may not convey the full range of its Hebrew equivalent. This is the same word that is used throughout the Old Testament to talk about the covenant loyalty that God displays to His people. In David’s view, that type of love is offered in reproof and correction—faithful, covenant love.

Perhaps you can agree with David. But do your actions?

Consider taking time to review the last few times you were confronted; how did you respond? How did you respond both externally and internally? You may have some forgiveness to seek and some improvement to obtain.

You may also consider planning for how you will respond if someone does confront you. Get a plan together now so that when you are confronted, (and I do hope it is when and not if—because if it is “if” then you have some big problems) you are ready to respond the way God wants you to.

Lastly, consider when was the last time someone confronted you. If the answer to that is, “I don’t know” or “it has been a while”, then you may have a very big problem on your hands, and you might need someone to come alongside you and soften the soil of your heart.

Let us be like David, and when we are struck by the righteous…we shall see it for the blessing that it is.