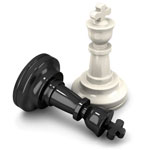 Two “titans” going head to head.  Sounds like the stuff of movies doesn’t it?  In this case, however, I am speaking about God and Pharaoh in Exodus.  God won against Pharaoh.  Was there ever any doubt?  Maybe the outcome was only doubted by Pharaoh himself.  He thought of himself as a titanic deity, able to control all of Egypt.  But He ended up unable to even control his own heart.   God hardened His heart.   The “hardening of the heart” plot line through the first part of Exodus is a grand clash of the titans showdown.

Most people struggle with the concept of God “hardening” a heart.  It is a difficult theological issue.  But Exodus and Romans 9:16-23 declares that it happened and happens.  This blog entry is not about trying to give a defense of that theological reality.  It’s about the bigger picture of the purpose behind that theme running through the first part of Exodus.

Before we move on to the plot line,  there is one thing that needs to be noted.  The Hebrew term for “glory/honor” is the same Hebrew term used throughout the first part of Exodus for the idea of “making heavy” —as in, make a “heart heavy/hard” or as in, make the Israelites’ load “heavy,” or as in “God is heavy/glorious!”  In the Exodus story, Pharaoh’s heart becomes “weighty” or “heavy” against the one true God.  But in the end there is only one Deity who is truly “heavy.”

Now, let’s look at the end of the story before we see how the story unfolds.  Exodus 14:17 states that in the end, Yahweh is left standing gloriously while Pharaoh is defeated, his army annihilated, and the Egyptians plundered.

At the end God alone is the “HEAVY,” “HONORED,”  “GLORIOUS” one.  But below is how the story started and unfolded blow by blow with the play on the word “heavy.”

This last declaration by Yahweh moves Him beyond being only the Lord over nature to also being the Lord over Pharaoh himself.   Yahweh is the one who can even control the heart of the strongest man and so-call god, the king (cf. Prov 21:1).  Notice that Yahweh did this only after Pharaoh himself hardened his own heart several times.

Yahweh makes it so that Pharaoh, punch drunk on resistance, cannot turn back now.  Yahweh sets in motion the events that will lead to Himself being exalted as the only Deity recorded forever in the history of redemption (Ex 15:11).   The nameless Pharaoh is remembered forever as the one who presumed to be god himself, going against the true God.  Pharaoh lost.

Here is my question for you.  How do you make yourself out to be a god against the one and only true God?  Do you anticipate a different result than Pharaoh?

Also, you are welcomed to ask any questions on Exodus 1-13.