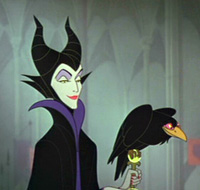 Most of us love a good villain.  Oxymoronic, isn’t it?  Good villain.

Over the years, Hollywood (and the literature on which its films are based) has given us a lot of good villains.  Darth Vader, the Joker, Sauron, and “he who must not be named” are all great examples.  But if you ask me, the most deliciously wicked of them all are the Disney villains.

In a recent poll, people were asked to select the most evil Disney villain of all time.  Some of the favorites included Scar from The Lion King, the wicked stepmother from Cinderella, and Ursula from The Little Mermaid.  But the villain who topped the list–Disney’s most wicked–was Sleeping Beauty’s Maleficent.

The name alone says it all.  If you look up “maleficent” in the dictionary you find that it means “harmful or evil in intent or effect.”  What a perfect description of this villainess.  She is wickedness personified, and her every word drips with malevolence.

But is it possible that Maleficent–in all her rotten majesty–is actually an animated version of you?  (Sounds like your classic pastoral trap, doesn’t it?)  The sad reality is that many of us are probably more like Maleficent than we even realize.

Inside a Wicked Mind

Take a look at the video below.   In this clip, Maleficent crashes the party being thrown by the king and queen to celebrate their daughter Aurora’s  birth.  As you watch, try to answer these questions:

So, the first question is pretty easy to answer.  Why did Maleficent crash the party?  Because she wasn’t invited.

Questions 2 and 3 require just a little more thought.  When Maleficent didn’t receive an invitation, she probably felt rejected, jealous, angry, and perhaps even hurt.  At that point, she had a choice to make.  She had to choose what she would think about her situation.

She could have chosen to trust in the sovereign plan of God and used the situation as an opportunity to examine her relationship with the king and queen.  Maybe she hadn’t been a good ally to the royal family.  Maybe her past actions had alienated her from the noble people of the kingdom.  Maybe she needed to repent of her wicked lifestyle of fear-mongering and power-grabbing.  Instead of playing the evil sorceress across the moat, maybe she needed to become a resource for good by using her position to meet the pressing needs within her community.

However, based on her actions, I think it’s safe to say that Maleficent didn’t choose that line of thinking.  It’s likely that she began to think things like “How dare they treat me like this,”  “I’ll show them,” or “They’ll be sorry.”  And it was this kind of thinking that prompted her lash out in revenge.

I doubt you’ve ever reacted to a personal slight by finding the nearest baby and placing a curse on it.  But I wonder if you’ve ever responded to someone who offended you by trying to take that person down a peg or two.

Maybe someone embarrassed you, and in response, you tried to embarrass them.  Maybe someone failed to fulfill a promise they made to you, and you reacted by returning the favor.  Maybe someone simply didn’t show you the attention you thought you deserved, and you chose to respond by giving them the cold shoulder.

When we make choices like this–ridiculous though it may seem–we behave just like Maleficent.  We become a Disney villain.  And it all begins with our thinking.

Vindictive, hurtful thinking usually takes place when someone commits an offense against us—or when we simply imagine that someone has offended us.  And like Maleficent, once we believe that someone has offended us,  we begin thinking things like “They can’t treat me that way” or “I know just what I’ll say to them, if that ever happens again.”  We can even get caught up in the fantasy of devising what we might do to them if we ever got the chance.

Jesus addressed this kind of thinking in a pretty direct way.

Now, murder is a bad thing, right?  We can all agree on that.

Now, that’s pretty extreme, but Christ’s logic tells us that our actions are a direct result of our thinking.  Hurtful thinking leads to all kinds of destructive behavior.  Hurtful thinking is the cause of every cruel word ever spoken, every punch ever thrown, every murder ever committed.  The book of Proverbs also makes this point when it says,

Have you ever gotten into an argument with someone and later thought to yourself, “Oh, I should have said this.  That would have really gotten them!”  Have you ever found yourself playing out an argument in your head when preparing to talk to someone.  You might have thought things like “If they say this, then I’ll say that, and that’ll really stick it to them.”  Have you ever done that?

Just like Maleficent, when we allow vengeful thinking to take place in our minds, we can find ourselves returning evil for evil rather than seeking the best interests of others as God intends.

1.  Did the person’s thinking and actions honor God?
2.  How did hurtful thinking affect the person’s behavior?
3.  What kinds of thoughts could have helped the situation?

Scenario #1
Jamie was playing basketball on the playground at school.  One of Jamie’s “friends,” Aaron, came up and started making fun of his haircut.  Jamie laughed it off until recess ended.  As they were walking back inside to their classes, Jamie thought, “I wish Aaron would just trip in front of everyone else.”  The students stopped to get a drink at the drinking fountain.  As Jamie walked by, Jamie noticed that the teachers weren’t looking.  Seeing the opportunity, Jamie kicked Aaron in the back of the leg just enough to make Aaron fall, but sly enough so that no one saw.

Scenario #2
Alex was at home studying in the room she shared with her sister Bailey.  While Alex was studying, Bailey came in to demand that Alex leave so she could talk on the phone.  Alex protested because she had homework to do.  She couldn’t believe that Bailey would ask her to relocate her homework when Bailey was only planning to talk on the phone.  But Bailey was insistent.  Gathering her books, Alex stormed out of the room muttering, “I hope you catch pneumonia and die!”

This post is based on the teaching series studied by our 3rd, 4th, and 5th graders called Thinking Like Christ. The series is based on John Vandegriff’s helpful book In the Arena of the Mind: Philippians 4:8

. We’re encouraging students to recognize the sinful patterns of thinking that exist in their lives and to replace those patterns with the forms of thinking outlined in Philippians 4:8.  The goal of this study is to help kids use their minds in ways that will produce godly habits of living.