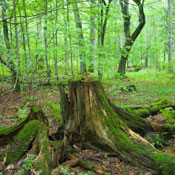 This story takes me back to summertime down near Crawfordsville, IN. My dad and us boys would spend as much time as was humanly possible down at the creek that ran along the backside of our property.  We spent so much time down there in fact, that we became increasingly dissatisfied with having to leave and go back up to the house (which was about dead center of our 22 acres).  Now, I can’t remember who started us down this road (my dad or us boys), but somehow we all got in our minds that we wanted to build a cabin at the top of the 60 foot cliff just above our favorite swimming hole.  Several years later, the idea had morphed from a small cabin to a full-fledged two- story, 2000 square foot house!

The first step in the process was simple since the spot we had picked was right in the middle of our woods.  We found ourselves cutting and hauling more wood that summer than we ever had in our entire lives.  We had cleared both a plot for the house and an extremely long driveway by the time we realized that overriding family plans (namely our move to Lafayette, IN) weren’t going to allow us complete the dream.  So the mostly-cleared plot sat there, strewn with huge logs and stumps.  Now we had worked hard, believe me, and if you would have asked us, we had cleared that area.  After all, where there were trees once before, there were now none.  Where there had been shade, now there was bright sunlight flooding the forest floor.  Yet if you had asked someone else (maybe someone not so emotionally invested in the project) they would have seen stump after stump, and log after log that still needed to be removed.  When it was all said and done, even though so much had been accomplished, we were still a far cry from putting in a foundation for a house.  You really could say that we’d left the job half done.

In the Sermon on the Mount  (Matthew 5-7) we find Christ holding his followers, not to the standard of the Law of Moses, but a higher standard still.  He calls His followers to go beyond the law in their devotion to Him…to not leave the job, in a manner of speaking, “half done.”   Christ begins point after point with, “You have heard that the Law of Moses says…” and then goes on to explain, in essence, that the law is not the goal, but just the starting point.  Not murdering someone is just the bare minimum.  We must take care of the root of that issue by not getting angry with someone in the first place.  Not sleeping around is just the starting point.  The goal should be to not look at anyone with lust.  Loving your friends is just the bare minimum…even criminals do that.  How about loving those who hate you? How about blessing those who would rather see you suffer than to see your face?  Being spiritual in public…that’s easy.  How about praying, giving, and caring for the needs of others privately…when no one but God knows about it?  It’s so easy for me to look at my life and think, “well, I don’t murder, I don’t sleep around, I love my friends, I do my devotions (after all, I couldn’t bear telling my accountability group that I didn’t have devotions everyday this week).”  Held up to Christ’s expectations, that thought process is minimalistic, shallow, and really quite lame.  If what Christ said is true, that anger is the same as murder, lusting after someone is the same as having sex with that person, that loving my enemies and caring for the needy in secret is the standard…man I still have some serious work yet to do if I’m going to be an actual follower of Christ (in word and deed).  I’d encourage you to read these chapters (5-7).  Christ uses some very strong language to describe the standard He’s calling us to.  Words like “pure” and “perfect.” Concepts like whole-hearted, undivided devotion.  Obviously, a calling that can only be lived out by the grace of God and the power of His Spirit.

The Results of “Half-Done”

Several years later I went back to that same clearing.  Guess what…it’s no longer a clearing.  In fact it’s what I would consider the opposite of a clearing.  That plot contains some of the most dense forest on those 22 acres.  Why?  Because we didn’t finish the job.  We didn’t go all the way.  We were satisfied to leave the stumps and roots and call it “cleared.”  Are you selling yourself short by convincing yourself that you’re a true follower of Christ when in reality you’re offering of worship is the bare minimum?   We must go further and deeper till we get to the heart of our sin (and likewise to the heart of our devotion).  If you’ve left the job half done, the external “clearing” you’re satisfied with today could manifest itself as a seriously dense forest of sin issues down the road.

I say we pick up our axes, shovels, bulldozers, font-end loaders, and most of all the double-edged sword of God’s Word, and get after the roots of our sin.  And this time, let’s not leave the job half done.

Titus Curtis
Titus has a degree in cross-cultural ministry and was on staff at Faith from 2000-2012.