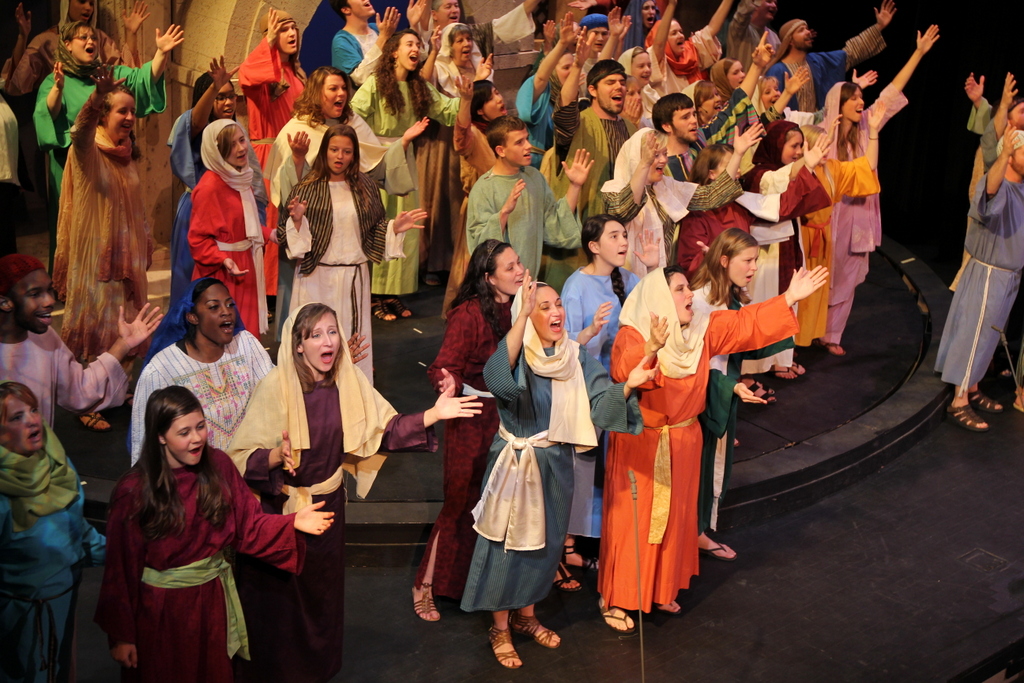 You plan for months.  You meet regularly with key leaders.  You hold marathon rehearsals with your cast, choir, orchestra, and crew for weeks.  And still, things happen that you don’t anticipate.  Here are three highlights of this year’s Passion Play problems:

Headsets seem to be the bane of our existence.  We need wireless headsets for communication between our stage manager and our backstage personnel.  That’s just one of those things a tech crew has to have to coordinate its tasks from different locations in the theatre.

Back in 2009, we had planned on using the theatre’s headset system.  When the time came to use it, however, we discovered that they were non-operational and that their system would probably never again be a reliable option for us.  So, we began renting headset systems.

This year, we had a rental system lined up.  However, when all of our rental equipment was delivered, we were told that one of our vendor’s “higher-priority clients” had commandeered our headset system and that they would not be able to help us.  That was bad news.

So, we scrambled to find an Indianapolis vendor with an available system.  (That’s not always easy at a time of year when many metropolitan churches are presenting Easter-themed productions of their own.)  Thankfully, we found one.

So, one of our tech guys spent a fair amount of time getting the system up and running so that we would have it operational for our tech rehearsal. Everything worked perfectly…until it was time to start the rehearsal.

Despite the challenge, God helped us, and we were able to muddle through our tech with positive results even though our access to wireless communication was inconsistent at best.  The next day, our tech guys went at it again and resolved the issue.  The headsets worked flawlessly during our dress rehearsal.

We present our Passion Play at The Long Center for the Performing Arts in downtown Lafayette.  This theatre was once a movie house where silent pictures were shown.  One of the unique features of the theatre is that it houses a huge Wurlitzer organ complete with massive wooden pipes attached to the walls backstage.  The pipe organ is as much a part of the theatre as the seating.

Recently, both received some upgrades.  The organ was refurbished and the theatre was equipped with several rows of new seating.  The result was that the organ console could no longer be relocated from the stage area to the adjacent pavillion (as we had done for years) to accommodate large theatrical productions like ours.

We were left with a few options:

There didn’t seem to be a good alternative until we realized that the alcove outside the theatre was just large enough to house the organ console while still meeting fire code.  Crisis averted.

That doesn’t sound like a problem, does it?  But there’s a common expression in theatre:  “Bad dress, good show.  Good dress, bad show.”  I’ve experienced both.

Frankly, I think the “bad dress, good show” expression was created by a director to boost the failing morale of a cast that had just experienced a bad dress rehearsal.

This year, our dress rehearsal went very well–so well, in fact, that we were able to squeeze two complete runs of the Passion Play into the window scheduled for one.  That’s an exceptionally good dress.

Despite decades of theatrical superstition, I believe the Lord has placed us in a really solid position to minister to our community through the Passion Play this year.  We covet your prayers for the effectivness of this ministry.

Don’t have your free tickets yet? Get them at http://faithlafayette.org/passion.