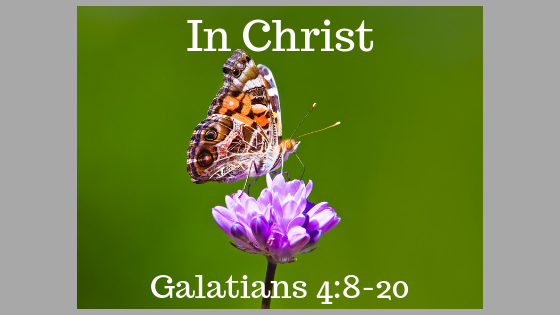 This year in 4:TWELVE Student Ministries we are studying the books of Galatians, Ephesians, Philippians, and Colossians.  We hope the recaps of the lessons will provide parents with an opportunity for follow-up conversations.  Please use this tool wisely.

8 However at that time, when you did not know God, you were slaves to those which by nature are no gods. 9 But now that you have come to know God, or rather to be known by God, how is it that you turn back again to the weak and worthless elemental things, to which you desire to be enslaved all over again? 10 You observe days and months and seasons and years. 11 I fear for you, that perhaps I have labored over you in vain.

12 I beg of you, brethren, become as I am, for I also have become as you are. You have done me no wrong; 13 but you know that it was because of a bodily illness that I preached the gospel to you the first time; 14 and that which was a trial to you in my bodily condition you did not despise or loathe, but you received me as an angel of God, as Christ Jesus Himself. 15 Where then is that sense of blessing you had? For I bear you witness that, if possible, you would have plucked out your eyes and given them to me. 16 So have I become your enemy by telling you the truth? 17 They eagerly seek you, not commendably, but they wish to shut you out so that you will seek them. 18 But it is good always to be eagerly sought in a commendable manner, and not only when I am present with you. 19 My children, with whom I am again in labor until Christ is formed in you— 20 but I could wish to be present with you now and to change my tone, for I am perplexed about you.

Johnny Kjaer
Johnny Kjaer oversees the Youth Ministries at Faith Church. He can often be found serving the community with the teenagers. His passion is to assist parents in training their teens to love the Lord. He and his wife, Tori, have four children; Leif, Tryggve, Kjirsti, and Hroarr.