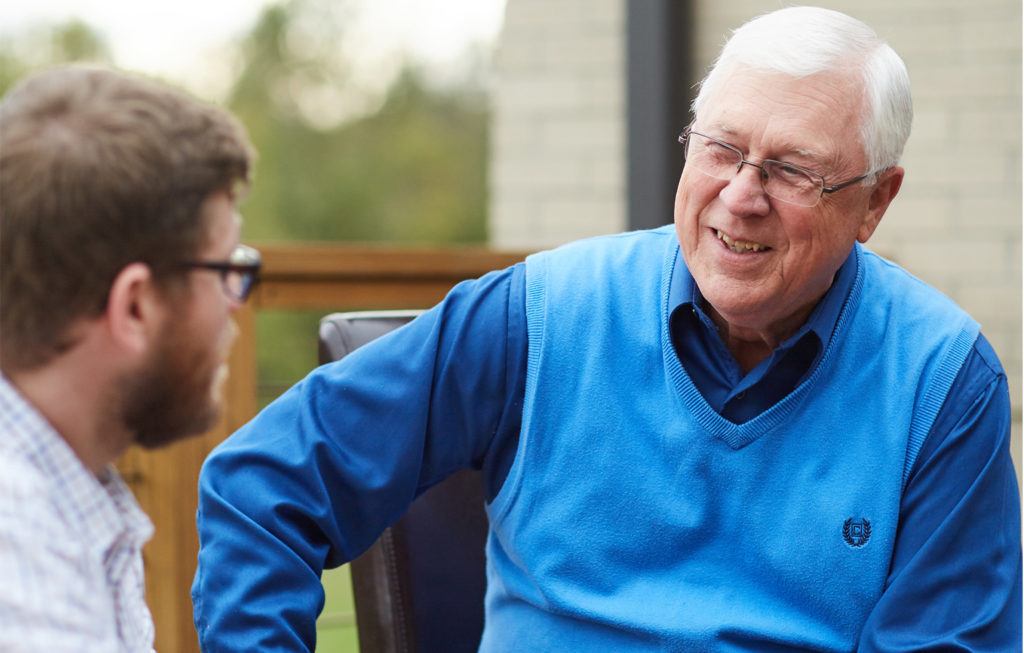 “But I do not consider my life of any account as dear to myself, so that I may finish my course and the ministry which I received from the Lord Jesus, to testify solemnly of the gospel of the grace of God.”   —Acts 20:24

I was introduced to biblical counseling in the late 1970’s when our pastor, Bill Goode, started training lay persons. After taking the Biblical Counseling Training Class and getting some experience, Pastor Goode would occasionally ask me and sometimes both my wife, Rita and I together, to take a counseling case. I was not retired then so my time was somewhat limited.

After I retired, I heard that the waiting list of persons seeking counseling was getting quite long. So, I told Doc Smith that I was available if needed. He said there was a need and they would appreciate my help, but they liked to tell counselees that all of our counselors were Certified by the National Association of Nouthetic Counselors (NANC)[1] or were working on certification. I told Doc, tongue-in-cheek, that I didn’t want to go back to college. Nevertheless, I began working on certification.

That year I began observing Doc’s cases as he mentored me. After a while he began calling it co-counseling but, of course, he was the counselor. Then the day came when Doc said, “Jerry, the next new case is yours.” My heart began to pound. He said he would just observe. He would not say a word unless I realized I was in trouble at which point I was to turn to him and say, “Doc, do you have anything you would like to add?” That was code for “Help! I’m drowning….save me!”

Well, the new case arrived and I was up to bat, nervously. The couple poured out on the table the worst mess you can imagine. It wasn’t long before I knew I was in over my head. I sent the signal to Doc. He quietly, calmly and confidently took the case over and did what I had seen him do many times. He started asking questions…”Duh.” I instantly became a better listener and, after that point, I never was intimidated with a case. That doesn’t mean I became a perfect counselor. Far from it. I have had to ask my counselee for forgiveness more than once.

I spent the next fifteen years counseling with Faith Biblical Counseling Ministries. Most of that time I carried a full load; usually, five cases on Monday from 1:30 to nearly 9:00. I also would counsel a couple of cases during the week.

Time has a way of letting us know that change is having a negative impact. I started having a chronic cough, and I was noticing that I was losing my quick recall. The combination was beginning to effect my counseling, so in March, 2020 I resigned my counseling position. That was a hard decision.

At my age (85) you get to know a lot of “ologists.” Finally, it began to pay off as my “ologists’ began to hone in on the real cause of my cough: I needed an in-office nasal procedure to free up more breathing room. My cough began to subside and my mental recall started to become more manageable. Then I heard that the Faith Restoration Ministries could use another counselor. This appealed to me, and I thought the Lord would be pleased if I gave it a try. I asked the director of the program, Greg Wetterlin, if he thought I would fit. He said, “Yes”, and I began.

The format really fit me. The counselling sessions were longer (I like that), and the topic was focused on addictions. This isn’t to say that other issues never arise. It is simply that addictions are the major focus. Basically, the counseling environment seems to fit me better. I am now counseling two young men. I am loving it. I have heard two things from my counselees that I have never heard from a counselee before. One asked me to give him more homework. The other asked if we could have longer sessions. You can’t imagine how that lifts the spirit of an old counselor.

In closing, I would like to quote Dr. Howard Eyrich, the recently retired Pastor of Counseling Ministries at Briarwood Presbyterian Church in Birmingham, AL: “While one may retire from an income producing life, we should continue with an active and productive life of service for the kingdom of God.” May the Lord continue to keep us spiritually productive, even in times of transition.

[1] The name is now the Association of Certified Biblical Counselors (ACBC).