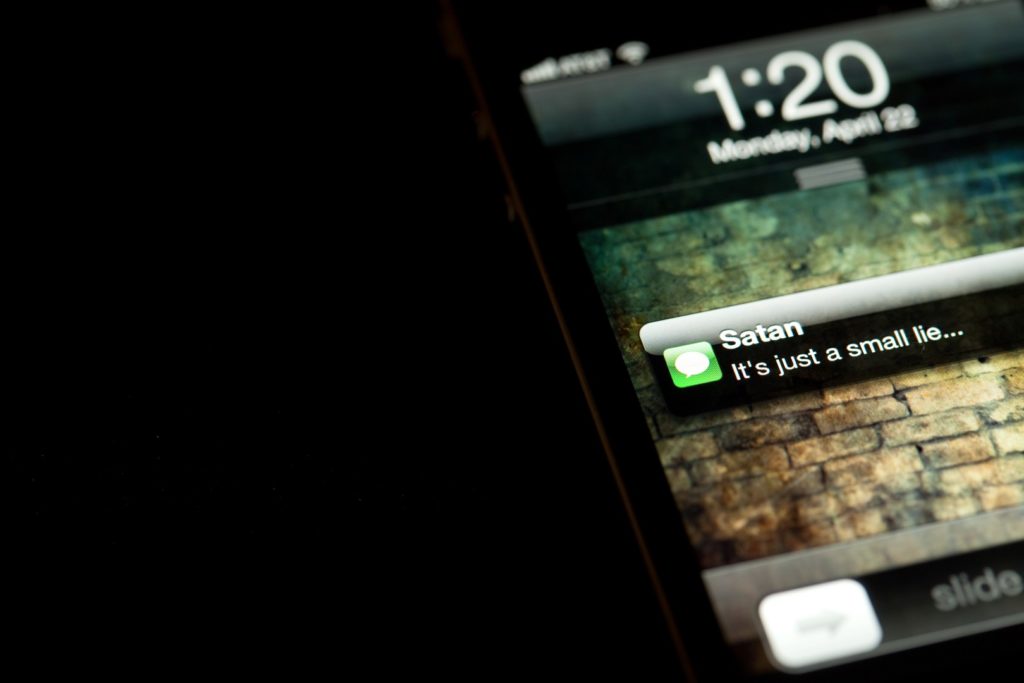 We have all done it. Being backed into a corner, seeing no way out, considering all the options that we have at our disposal–we took the low road. We lied. We comforted ourselves with a variety of statements to quiet our conscience. “They would not understand,” “It was necessary for the moment,” “I’m not really lying, I’m just not telling the full truth” and so on. Or perhaps we didn’t lie, perhaps we ONLY deceived someone. Research shows that people are unlikely to directly lie, rather we are more likely to misdirect or deceive someone; telling half-truths or omitting information, but not full-blown lies.

But what lies at the heart of a liar? (pun intended ;) Why do people choose to communicate and act this way, and what is a gospel-centered solution to helping someone whom you believe is lying to you?

Sinful choices can take on a variety of reasons that lead us to an action. With lies, there’s not just one, or two, or three specific reasons that someone will choose to lie. There could be a large number of rationales or circumstances for justifying a lie, but the deceitful action is the same. In this blog series, we are going to look at why someone lies and how to help them recognize the harm being done when making the decision to lie.

We’re going to exam this subject in two sections.

First, can a person who regularly chooses not to tell the truth be planted in any kind of fertile soil? A tree cannot grow without soil. You can’t have an apple without dirt, and that dirt needs to have the right mixture. Without the proper soil (or soil at all) fruit cannot grow.

Second, we will look at desires of the heart which convince a person to lie instead of telling the truth. We will examine this from an understanding of how our desires can produce good things (or not produce good things). Desires can fertilize our soil and cause fruit to grow, or desires can lead to actions which prohibit growth of fruit. At the foundation of every tree are its roots. Those roots draw nutrients from the soil in order to produce the fruit. If our roots are not firmly planted in a fertile nutrient-rich soil, then neither can we produce fruit. Without a firm rooted foundation, our heart’s desires are likely to be carried out in actions which reflect a lacking conviction, and yields no fruit at all (or spoiled fruit, which is just as bad or worse).

There are essential nutrients missing or not cultivated in the soil of someone who tells lies regularly. The parallel between a person’s faith and a soil’s nutrient value are incredibly similar. The components of faith (a.k.a. ‘essential nutrients’), which are missing in the heart of a liar’s lies, are:
• Valuing what God Values
• Conviction in God’s Word
• Perception of God’s Plan in Outcomes

When you treasure these components of your faith, they will work for your good, not against you. But you must first understand them as being from God Himself and that they are placed in you according to His purpose.

Cultivating the right mixture for a fertile soil will allow for the growth of fruit. This is recognized through faithful commitment and a heart’s desire that reflects righteousness.

What we value is the first and most significant problem that we all have. This is where all our hearts begin to go astray. We think something is worth something when it is not. We are good at assigning value to something that is worthless. The person that is a liar is under the impression that the wrong things are important. We will flesh out what those are later, but this step is important for us to see, first. A liar will put a high value on things that God puts a low value on.

No soil can be fertile without conviction in His plan and purpose. In order to produce fruit, there must be conviction in what God calls for in His Word – in this case, He calls us to tell the truth. When someone chooses to lie, then they are not convinced of what God’s word says about this. They are either apathetic to it, or they see a grey area on the topic. Maybe they think that their situation is an exception or that they’ve discovered some sort of loophole to the expectation that God sets before us. They see room to exploit an exception to the rule, or worse yet they have abandoned what God’s word has said. Scripture is clear; God calls for us to tell the truth. Perhaps they have turned to the two examples in scripture where someone lied, and God did not automatically condemn them (like the Jewish women saving the Israelites from being thrown in the Nile River (Ex. 1) and Rahab lying about the two spies (Joshua 1). However, an argument from silence will not stand the weight of scripture. Over and over God’s word condemns telling a lie and being deceptive (Pr. 12:22).

The person that lies has lost this conviction. They have chosen not to believe what God’s word says about this action. They fail to see that passages like Rev. 22:15 put liars in with those who practice magic, are sexually immoral, murders, and idolaters. A sin is a sin.

Perception of God’s Plan in Outcomes

A liar believes that they’ll get away with it. They are convinced that nothing will come of it, but their perception of the outcome is flawed. If perception for the different outcomes of truth versus a lie is not recognized, then how can the liar predict that something negative will come of their lie? Their lack of perception for God’s plan and purpose, and ultimately their inability to reasonably predict or care about outcomes, will be revealed (they’ll ‘get caught’) and this will be revealing of their heart as well.

Within the heart of everyone who lies is a certainty that no one will ever know and that the lie will not be discovered because they are careful in crafting it. Naturally, a liar is also a proud person in that they think they’re ‘too good’ or ‘too smart’ to be caught in the deception. This can take the form of a very subtle pride. We are used to seeing proud people being boisterous, obnoxious and easy to spot. However, there are many sins that are displayed as a quiet form of pride. Lying is a ‘quieter’ form of pride, it is not the kind of pride which is shouted from rooftops (after-all, the liar is trying to keep something quiet).

If you leave a garden unattended, it will grow weeds. If you leave it for years and years, it will be impossible for you to tell that it was ever a garden at all. The person that chooses to lie has chosen not to cultivate, not to produce fruit. They are not tending to the garden that is their life and their relationships with others, and, most importantly, with God Himself. They have chosen the path that will ultimately be their own undoing, they have chosen to commit the sin of lying. We must be purposeful in thinking on what is true, what is right, what is noble and excellent (Phil. 4:8). When we do this, we are setting our heart up for making the right decision when we are presented with a situation where lying might be easier.

In part 2 we are going to look at what are some of the prevailing heart attitudes and desires that we see in the persons that choose to lie. It is vital for anyone seeking to help someone who struggles with the sin of lying, to figure out what are they wanting more than they are wanting to please Jesus. In the final article of this blog series, we will examine how you should act toward a person who is lying and, if they want help, what you can do to minister to this person to help them overcome their struggles with lying.