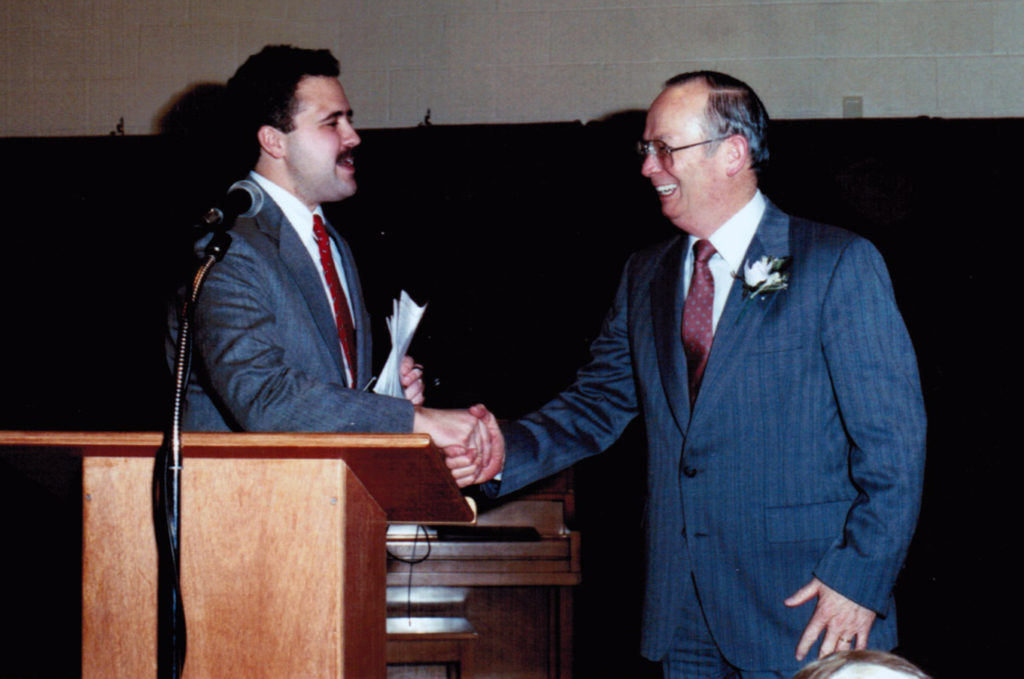 Today is the 20th anniversary of Pastor Bill Goode’s promotion to heaven. The following tribute, written in 1997 by Randy Patten, summarizes the lasting impact Pastor Goode had on the church and in biblical counseling circles.

On August 23, 1997 Bill Goode died suddenly and was called into the company of “righteous men made perfect” in the presence of Jesus Christ. Pastor Goode served as senior pastor of Faith Baptist Church in Lafayette, Indiana (1975-1996), co-founded Faith Baptist Counseling Ministries in 1973, and had served as executive director of the National Association of Nouthetic Counselors since 1988. He leaves behind his wife, Mildred, with whom he shared 45 years of marriage.

Bill Goode was a pastor to pastors in so many ways. I’ll mention just seven. God used Bill as a pastor to pastors first by his being open and approachable. If you wanted to have a meal with Bill at a conference, you better get it scheduled quickly. He was never alone. He and Mildred were wonderfully used to help many of us in vocational Christian ministry because they were so easy to approach.

He was a pastor of pastors, third, because he listened when we called. He had time for us. I look back on some of the questions that I troubled him with and marvel at his patience.

He was a pastor to pastors because he made us laugh. Bill had a wonderful sense of humor that he used to add perspective to what we were facing. Not only was he famous or infamous, however you want to view it, for his jokes—some of which were pretty corny—but he loved to jest with us. I remember one time after I had preached, he came up to me and thanked me for the message and said, “I think that’s a good outline, Randy. I’m going to take it, make something of it, and preach it to my own people.”

Sixth, Bill Goode was a pastor to pastors because he modeled a giving ministry that went beyond his primary focus of ministry. All too often the temptation is for us to be consumed with our own life and ministry. But Bill’s ministry reached far beyond that sphere. Faith Baptist Counseling Ministries speaks about that every Monday in the training programs for other pastors. The missionary conference in February speaks about that every year, when hundreds of missionaries from around the world are trained in using God’s Word to solve problems. His endless travels speak about his ministry that goes beyond Indiana, beyond the United States, around the world.

Finally, Bill was a pastor to pastors because he confronted us with the Scriptures. Years ago when I was pastoring in Fort Wayne in the early days of my ministry, I called him about a significant problem. As we talked, it became increasingly evident to me—I think I knew it before I called him—that the people involved needed to be lovingly confronted. If they didn’t repent, they needed to be disciplined for Christ’s honor and their welfare. I still remember telling Bill that I was working on it, but my people weren’t quite spiritual enough yet to follow through on biblical church discipline. Bill’s response was so memorable that to this day I can tell you which direction I was facing in the chair in which I was sitting. Bill, in that Southern drawl of his, said, “Randy, how spiritual were the people at Corinth when God told them to discipline?” That’s what I needed to hear. That was good pastoring. That’s how he has helped so many of us.

Several years ago Bill asked me if I would participate in his funeral service. I said yes, and joked that I hoped I made it to glory before he did. But I did give some thought to what I would say if the opportunity presented itself to speak to pastors in honor of Bill’s life. A Scripture came to my mind at that time. I leave it with you today in my best attempt to pastor you as Bill would. It is the first line of Proverbs 23:23: “Buy truth and sell it not.” Bill’s life was committed to teaching all of us that there is Truth. There is something you can build your life around. Jesus Christ is truth. His Word is truth. That conviction prompted Bill to give so selflessly to others. That truth years ago prompted Bill to ask me to go with him to another state to help a significant church that was in deep trouble. It was a long, hard meeting. Difficult problems. I still remember what happened as we came back to Lafayette down Interstate 65 in the wee hours of the morning. Bill was telling me a story and fell asleep mid-sentence. I’d heard of that happening but had never witnessed it before. God convicted me that here was a man who had plenty going on here at home, but he had time for another church because he believed there is Truth.

Proverbs 23:23 says, “Buy truth and sell it not.” When you buy something, you exchange what you have for what you want. Proverbs 23:23 teaches that truth can be had, but there is a price to be paid. Buy truth. It’s worth everything you have.

Bill encouraged us to give up our time and make the study of the Scriptures a priority. Buy truth. Spend what it takes to learn the Word. He exhorted us, and I exhort fellow Christian workers today to give up our pride. Admit that when we can’t help people solve the nonorganic problems of life, the problem is with our failure to study and to understand the principles of the Scripture and our failure to develop our ministry skills. Don’t glibly say, “This is something I can’t handle,” and send people off to someone trained in secular methods and secular theories, even if such a person calls himself a Christian. We ought to humble ourselves and open our Bibles and search the Scriptures to find answers for Christ’s flock. Give up our pride.

Bill taught us that if we’re going to buy truth, we must give up our religious prejudices and focus on the great themes of the Scripture: God’s holiness, man’s sinfulness, God’s mercy, and progressive sanctification. Don’t focus on that list of “sins” and emphases
that so many of us grew up with as the primary distinguishing marks of ministry. If we’re going to buy truth, we buy it by giving up our own desires and living by God’s Word ourselves. Bill reminded us that we learn truth by living truth. The Scripture says, “In
thy light we see light.”

Proverbs 23:23 also says, “Buy truth and sell it not.” Not only can truth be had; it can also be lost. When you sell something, you give up what you have for something else you want more. It’s all too easy to sell the truth—for popularity, ease, money, pride. Don’t ever sell truth; at any price. Bill Goode pastored pastors by reminding us that we can lose truth. In his spirit today I exhort fellow Christian workers that we can lose truth by trying to integrate or supplement or amalgamate God’s truth with man’s foolish wisdom. When you integrate two things, both are changed. Man’s folly starts to sound wiser than it really is, and
God’s wisdom gets watered down and distorted. God’s Word inevitably loses its controlling influence.

We can sell truth in our lives by failing to have a learner’s spirit. I marveled that Bill was always reading and always listening to others. When we would go to a conference, he wasn’t one of the ones standing in the hallway talking to people while the seminars were going on. He was inside the room, still learning. We can sell the truth by preaching it but not practicing it. Years ago he confronted me about an area in my own life and said, “Randy, how in the world are you going to help your own people get answers if you don’t get answers yourself?” We can sell the truth by taking ourselves too seriously, forgetting that it’s God’s work. We have one job; be faithful. “Buy truth and sell it not.”